The U.S. Military and Stability Operations 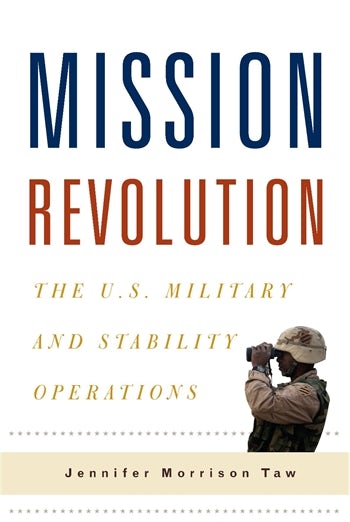 The U.S. Military and Stability Operations

Defined as operations other than war, stability operations can include peacekeeping activities, population control, and counternarcotics efforts, and for the entire history of the United States military, they have been considered a dangerous distraction if not an outright drain on combat resources. Yet in 2005, the U.S. Department of Defense reversed its stance on these practices, a dramatic shift in the mission of the armed forces and their role in foreign and domestic affairs. With the elevation of stability operations, the job of the American armed forces is no longer just to win battles but to create a controlled, nonviolent space for political negotiations and accord. Yet rather than produce revolutionary outcomes, stability operations have resulted in a large-scale mission creep with harmful practical and strategic consequences.

Jennifer Morrison Taw examines the military's sudden embrace of stability operations and its implications for American foreign policy and war. Through a detailed examination of deployments in Iraq and Afghanistan, changes in U.S. military doctrine, adaptations in force preparation, and the political dynamics behind this new stance, Taw connects the preference for stability operations to the far-reaching, overly ambitious American preoccupation with managing international stability. She also shows how domestic politics have reduced civilian agencies' capabilities while fostering an unhealthy overreliance on the military. Introducing new concepts such as securitized instability and institutional privileging, Taw builds a framework for understanding and analyzing the expansion of the American armed forces' responsibilities in an ever-changing security landscape.

Taw's tightly argued analysis should be of interest to all readers...highly recommended. Choice

Read the opening pages of Mission Revolution: The U.S. Military and Stability Operations (to view in full screen, click on icon in bottom right-hand corner):

Jennifer Morrison Taw is associate professor at Claremont McKenna College, teaching international relations, security studies, and U.S. foreign policy. She worked for ten years as a policy analyst at the RAND Corporation, where she focused on counterinsurgency, counterterrorism, and peacekeeping.