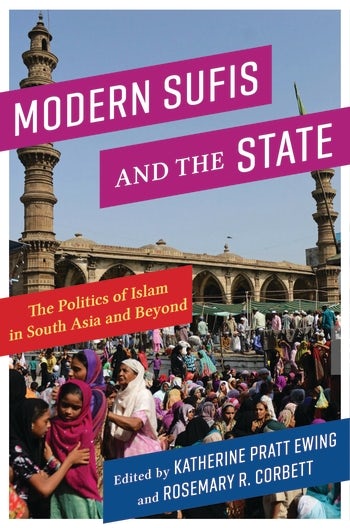 Sufism is typically thought of as the mystical side of Islam. In recent years, it has been held up as a supposedly peaceful alternative to the spread of forms of Islam associated with violence, an embodiment of democratic ideals of tolerance and pluralism. Are Sufis in fact as otherworldy and apolitical as this stereotype suggests?

Modern Sufism and the State brings together a range of scholars, including anthropologists, historians, and religious-studies specialists, to challenge common assumptions that are made about Sufism today. Focusing on India and Pakistan within a broader global context, this book provides locally grounded accounts of how Sufis in South Asia have engaged in politics from the colonial period to the present. Contributors foreground the effects and unintended consequences of efforts to link Sufism with the spread of democracy and consider what roles scholars and governments have played in the making of twenty-first-century Sufism. They critique the belief that Salafism and Sufism are antithetical, offering nuanced analyses of the diversity, multivalence, and local embeddedness of Sufi political engagements and self-representations in Pakistan and India. Essays question the portrayal of Sufi shrines as sites of toleration, peace, and harmony, exploring cases of tension and conflict. A wide-ranging interdisciplinary collection, Modern Sufis and the State is a timely call to think critically about the role of public discourse in shaping perceptions of Sufism.

Modern Sufis and the State shows the diversity, multivalence, and local embeddedness of Sufi political engagements and this emphasis on complexity and local rootedness is a welcome contribution to the field. The editors and the contributors bridge several different fields and combine expertises to offer new and important perspectives on the Barelwi and Deobandi movements. Scott Kugle, author of Sufis and Saints’ Bodies: Mysticism, Corporeality and Sacred Power in Islam

Katherine Pratt Ewing is professor of religion at Columbia University and professor emerita of cultural anthropology at Duke University. Her books include Arguing Sainthood: Modernity, Psychoanalysis, and Islam (1997) and Stolen Honor: Stigmatizing Muslim Men in Berlin (2008).

Rosemary R. Corbett is the author of Making Moderate Islam: Sufism, Service, and the “Ground Zero Mosque” Controversy (2017). She is a faculty fellow for the Bard Prison Initiative and holds a PhD in religion from Columbia University.