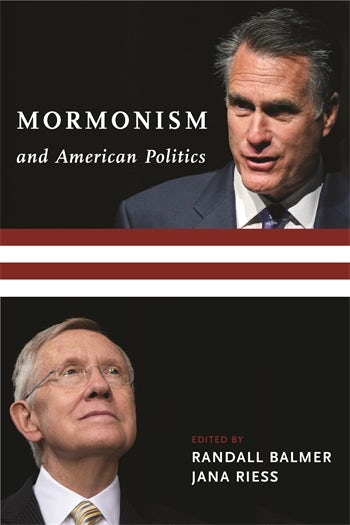 When Joseph Smith ran for president as a radical protest candidate in 1844, Mormons were a deeply distrusted group in American society, and their efforts to enter public life were met with derision. When Mitt Romney ran for president as a Republican in 2008 and 2012, the public had come to regard Mormons as consummate Americans: patriotic, family-oriented, and conservative. How did this shift occur?

In this collection, prominent scholars of Mormonism, including Claudia L. Bushman, Richard Lyman Bushman, Jan Shipps, and Philip L. Barlow, follow the religion's quest for legitimacy in the United States and its intersection with American politics. From Brigham Young's skirmishes with the federal government over polygamy to the Mormon involvement in California's Proposition 8, contributors combine sociology, political science, race and gender studies, and popular culture to track Mormonism's rapid integration into American life. The book takes a broad view of the religion's history, considering its treatment of women and African Americans and its portrayal in popular culture and the media. With essays from both Mormon and non-Mormon scholars, this anthology tells a big-picture story of a small sect that became a major player in American politics.

It was a welcome treat to read a group of well-organized, well-written, and eminently readable essays from a diversity of distinguished authorial voices that, across the board, maintain a high level of quality. Mormonism and American Politics' nuanced contextualization of Mormonism successfully engages larger issues within U.S. religious history by means of focused, provocative case studies, making it relevant to scholars in a wide range of disciplines. Susanna Morrill, Lewis & Clark College

This volume offers the best single collection of essays on Mormonism and American politics, a topic that is both rich and deserving of sustained scholarly treatment. Patrick Q. Mason, Claremont Graduate University

From Joseph Smith's presidential bid and Brigham Young's theodemocracy, to Prop 8 and the Romney campaign of 2012, Mormons have engaged in a complex struggle to reconcile Latter-day Saint exceptionalism with political accommodation and legitimacy. Perhaps no faith tradition in America has been at the center of more church-state conflicts than Mormonism, and this vibrant collection of essays plumbs both past lessons and future prospects. Terryl Givens, author of Wrestling the Angel: The Foundations of Mormon Thought

Mormonism and American Politics is the most deft, discerning, and nearly definitive book of essays about Mormons and politics ever published. The authors treat captivating facets of Mormon history—some famous, some unearthed here—with an eye-popping verve that shapes a new vista on both Mormonism and the evolving America in which it emerged. Jon Butler, Yale University

Charting the shifting alliances and tensions between Mormonism and broader national currents, this volume offers an incisive narrative of the history of religious engagement with electoral politics. As the quintessential "outsider religion," Mormonism has danced on the knife-edge between toleration and rejection, acceptable diversity and illegitimate cult. These evocative essays trace that distinctively American dance and offer important lessons about the promise and perils of religious pluralism. Laurie Maffly-Kipp, Washington University

The authors of these essays give genuine insight into Mormonism's political present without neglecting the significance of its past. A smart, accessible collection, it is a very good read for the academic and general public. Especially for the classroom, the volume offers an opportunity to discuss America's engagement with religion on such important themes as race, gender, majoritarian politics, religious liberty and its informal, but no less important, public counterpoint, toleration. Kathleen Flake, University of Virginia

This timely collection integrates multiple perspectives and insights by leading scholars. The importance of Mormonism to American political life is shown here not only as a present phenomenon, but an enduring one across almost two hundred years. Sarah Barringer Gordon, University of Pennsylvania

The most historically informed and culturally sophisticated analysis of the subject to date.... Highly recommended. Choice

This is a book that lives up to its blurbs. BYU Studies Quarterly

Intelligibly written and academically sound. It makes a valuable contribution to our understanding of an important religious denomination in American culture and politics while simultaneously illuminating the historical interaction and mutual impact of religious and political institutions in a democratic society. The Journal of American History

The strengths of this volume is its combination of accessibility and scholarly originality. Journal of Church and State

List of Illustrations
Introduction, by Randall Balmer and Jana Riess
Part I: Origins and Tensions
1. Joseph Smith's Presidential Ambitions, by Richard Lyman Bushman
2. Unpopular Sovereignty: Brigham Young and the U.S. Government, 1847–1877, by John G. Turner
3. Polygamy in the Nation's Capitol: Protestant Women and the 1899 Campaign Against B. H. Roberts, by Jana Riess
4. Eternal Progression: Mormonism and American Progressivism, by Matthew Bowman
Part II: Shifting Alliances
5. Ezra Taft Benson and the Conservative Turn of "Those Amazing Mormons," by Jan Shipps
6. Testimony and Theology: The Mormon Struggle with America's Civil Religion, by Russell Arben Fox
7. Chosen Land, Chosen People: Religious and American Exceptionalism Among the Mormons, by Philip L. Barlow
8. Like Father, Unlike Son: The Governors Romney, the Kennedy Paradigm, and the Mormon Question, by Randall Balmer
Part III: Into the Twenty-first Century
9. A Politically Peculiar People: How Mormons Moved into and Then out of the Political Mainstream, by David E. Campbell, Christopher F. Karpowitz and J. Quin Monson
10. "Twice-told Tale": Telling Two Histories of Mormon-Black Relations During the 2012 Presidential Election, by Max Perry Mueller
11. Mormon Women Talk Politics, by Claudia L. Bushman
12. On the "Underground": What the Mormon "Yes on 8" Campaign Reveals About the Future of Mormons in American Political Life, by Joanna Brooks
13. Mitt, Mormonism, and the Media: An Unfamiliar Faith Takes the Stage in the 2012 U.S. Presidential Election, by Peggy Fletcher Stack
List of Contributors
Index

Randall Balmer is chair of the religion department and John Phillips Professor in Religion at Dartmouth College. An award-winning historian, his books include God in the White House: How Faith Shaped the Presidency from John F. Kennedy to George W. Bush and Mine Eyes Have Seen the Glory: A Journey into the Evangelical Subculture in America, which was made into an award-winning documentary for PBS.

Jana Riess is the author or coauthor of many books, including Flunking Sainthood, American Pilgrimage, and Mormonism for Dummies. She has taught at Barnard College and Miami University in Ohio and is a senior columnist for Religion News Service.