A History of Its Architecture and Development 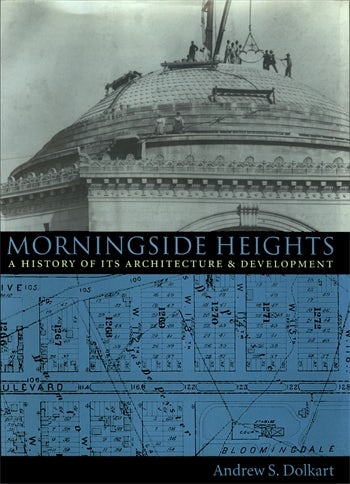 A History of Its Architecture and Development

Morningside Heights, the institutional heart of New York City, is also one of the city's most architecturally distinguished neighborhoods. The high plateau that forms Morningside Heights is geographically isolated within the city and remained largely undeveloped even as neighboring Harlem and the Upper West Side became prestigious residential communities. At the end of the nineteenth century, institutions relocated to the plateau where sizable plots were available at a convenient distance from the built-up city. In 1887 Episcopal Bishop Henry Potter announced plans for the construction of a great cathedral at the edge of the plateau. The cathedral was soon followed by Columbia College and St. Luke's Hospital, which contemplated grand complexes, and by newer institutions such as Barnard College and Teachers College that were intent on establishing a presence in the rapidly growing city. Thus, Morningside Heights became indelibly associated with New York's educational, medical, and religious foundations, and was appropriately dubbed "the Acropolis of New York."

In this extensively illustrated book, Andrew S. Dolkart explores the architecturally varied complexes built by these organizations. He traces the successes and failures of each building project, as trustees and supporters struggled to raise funds in order to construct great campuses in a city where residents were not always generous in their support of such endeavors. Commissioning designs from some of city's and the nation's leading architects, the Morningside Heights institutions created a richly diverse ensemble of buildings.

The book tells the stories of the excitement surrounding the initial plans for an Episcopal cathedral and the ultimate failure of this grandiose project; the efforts of John D. Rockefeller, Jr. to build a rival nondenominational church (Riverside Church); the development of Charles McKim's inspired designs for Columbia's campus; the efforts of Barnard and Teachers College to build impressive campuses adjacent to Columbia; and the later projects of Union and Jewish theological seminaries and the Institute of Musical Art (late the Julliard School) to erect buildings that would be part of the larger institutional concentration, but world provide each with a unique architectural identity.

Dolkart also traces the history of the surrounding residential neighborhood, providing the first comprehensive analysis of the design and construction the early-twentieth-century speculative apartment houses that typify so many New York neighborhoods. Based on extensive research and incorporating more than 200 photographs, Morningside Heights will appeal to anyone interested in architecture, urban development, or the history of New York City, as well as those associated with the neighborhood or its institutions.

Combines recondite research with bare-knuckle history, interweaving the nuts and bolts of neighborhood-building with a messy human drama of rivalry, greed, marketing, bigotry and idealism. The New York Times

Every town, hamlet, and neighborhood deserves an historical portrait by Andrew Dolkart. His history of Morningside Heights is a magnificent work of scholarship that grows out of a true love of urbanism and a profound respect for the contribution of architects and developers, whether high-minded or not-so, to the vitality of place. Robert A. M. Stern

While Dolkart focuses on aesthetics, his analysis of taste and design is informed by a penetrating knowledge of Manhattan's social history. The resulting book, gracefully written and generously illustrated, will appeal to historians, residents, and anyone whose search for scarce parking on the Heights has taken them past buildings which astonish and delight.... Dolkart adeptly explains the social implications behind... artistic decisions.... the work is a remarkable social portrait. New York History

Andrew S. Dolkart teaches at the Columbia University School of Architecture and has written and lectured extensively about New York's architecture and development. He is the author of the Guide to New York City Landmarks, has curated numerous exhibitions, and is well-known for his walking tours of New York City neighborhoods.