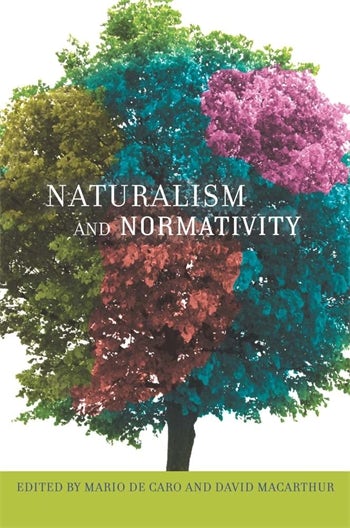 Normativity concerns what we ought to think or do and the evaluations we make. For example, we say that we ought to think consistently, we ought to keep our promises, or that Mozart is a better composer than Salieri. Yet what philosophical moral can we draw from the apparent absence of normativity in the scientific image of the world? For scientific naturalists, the moral is that the normative must be reduced to the nonnormative, while for nonnaturalists, the moral is that there must be a transcendent realm of norms.

Naturalism and Normativity engages with both sides of this debate. Essays explore philosophical options for understanding normativity in the space between scientific naturalism and Platonic supernaturalism. They articulate a liberal conception of philosophy that is neither reducible to the sciences nor completely independent of themyet one that maintains the right to call itself naturalism. Contributors think in new ways about the relations among the scientific worldview, our experience of norms and values, and our movements in the space of reason. Detailed discussions include the relationship between philosophy and science, physicalism and ontological pluralism, the realm of the ordinary, objectivity and subjectivity, truth and justification, and the liberal naturalisms of Donald Davidson, John Dewey, John McDowell, and Ludwig Wittgenstein.

There is, in sum, much food for thought in De Caro and Macarthur's latest offering, and many of the papers will no doubt figure prominently in future discussions of the scope and limits of naturalism Jonathan Knowles, Philosophy in Review

A valuable 'contribution to a fruitful controversy' and will help shape how the relation between naturalism and normativity can be understood and developed. Benedict Smith, Notre Dame Philosophical Reviews

Introduction: Science, Naturalism, and the Problem of Normativity, by Mario De Caro and David Macarthur
Part I. Conceptual and Historical Background
1.The Wider Significance of Naturalism: A Genealogical Essay, by Akeel Bilgrami
2. Naturalism and Quietism, by Richard Rorty
3. Is Liberal Naturalism Possible?, by Mario De Caro and Alberto Voltolini
Part II. Philosophy and the Natural Sciences
4. Science and Philosophy, by Hilary Putnam
5. Why Scientific Realism May Invite Relativism, by Carol Rovane
Part III. Philosophy and the Human Sciences
6. Taking the Human Sciences Seriously, by David Macarthur
7. Reasons and Causes Revisited, by Peter Menzies
Part IV. Meta-ethics and Normativity
8. Metaphysics and Morals, by T. M. Scanlon
9. The Naturalist Gap in Ethics, by Erin I. Kelly and Lionel K. McPherson
10. Phenomenology and the Normativity of Practical Reason, by Stephen L. White
Part V. Epistemology and Normativity
11. Truth as Convenient Friction, by Huw Price
12. Exchange on "Truth as Convenient Friction", by Richard Rorty and Huw Price
13. Two Directions for Analytic Kantianism: Naturalism and Idealism, by Paul Redding
Part VI. Naturalism and Human Nature
14. How to be Naturalistic Without Being Simplistic in the Study of Human Nature, by John Dupré
15. Dewey, Continuity, and McDowell, by Peter Godfrey-Smith
16. Wittgenstein and Naturalism, by Marie McGinn
List of Contributors
Index

Mario De Caro is associate professor of moral philosophy at University of Rome 3. He was a Fulbright Fellow at Harvard University and has taught at Tufts University. He has edited several anthologies, including, with David Macarthur, Philosophy in an Age of Science, two new volumes of essays by Hilary Putnam.

David Macarthur is senior lecturer in philosophy at the University of Sydney. He has published articles on skepticism, naturalism, neopragmatism, and Wittgenstein in leading journals, and, with Mario De Caro, is the editor of Naturalism in Question.