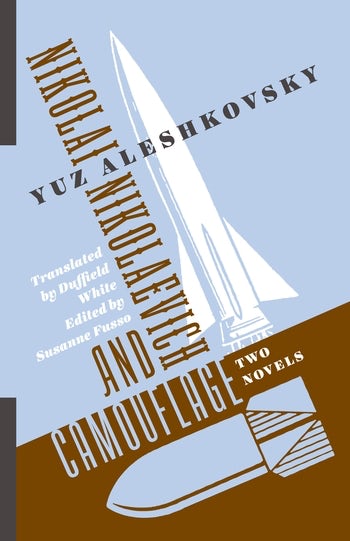 Among contemporary Russian writers, Yuz Aleshkovsky stands out for his vivid imagination, his mixing of realism and fantasy, and his virtuosic use of the rich tradition of Russian obscene language. These two novels, written in the 1970s, display Aleshkovsky’s linguistic gifts and keen observations of Soviet life.

Nikolai Nikolaevich begins when its titular hero, a pickpocket by trade, is released from prison after World War II and finds a job in a Moscow biological laboratory. Starting out as a kind of janitor, he is soon recruited to provide sperm for strange experiments intended to create life in the Andromeda galaxy. The hero finds himself at the center of the 1948 purge of biological science in the Soviet Union, in a transgressive tale that joins science fiction (and science fact) with gulag slang and a love story. The protagonist and narrator of Camouflage is an alcoholic who claims that he and his gang of friends are just one part of a vast camouflaging operation organized by the Party to hide the Soviet Union’s underground military-industrial complex from the CIA’s spy satellites. As they pass their time on the streets and share their alcohol-inspired fantasies, they see the stark reality of the Cold War in Russia in the late seventies. Nikolai Nikolaevich and Camouflage introduces English-speaking readers to a master of the comic first-person narrative.

Joseph Brodsky once noted that Aleshkovsky had a Mozartian ear for the Russian language, and Nikolai Nikolaevich (1970), his first novel, as well as Camouflage (1978), his fourth – written the year before the author emigrated permanently to the US – are indeed virtuoso performances. . . . Staying faithful to Aleshkovsky’s foul-mouthed muse, White’s translation, edited by Fusso, mines the rich muck of anglophone cussing with evident glee, and the effect is delightful. Boris Dralyuk, Times Literary Supplement

Rescued from the literary underground, these two historical novellas provide a coarse satirical insight into post-World War II Soviet dissatisfaction. Aleshkovsky emigrated from the Soviet Union in 1979 as an infamous writer of imaginative dissident fiction. . . . Through his two scurrilous antiheroes, Aleshkovsky laughs at Russian society from the gutters of the Soviet underworld. Kirkus Reviews

Forget old myths about censored, obedient Soviet citizens, and meet Aleshkovsky’s wildly enterprising and emphatically free-thinking protagonists who don’t hesitate to use colorful language to make a point about body politics, the scientific use of semen, and other absurdities of modern life. Yvonne Howell, University of Richmond

Completely irreverent — in the best possible way. Underneath the biting satire and the unrelenting hilarity, Yuz Aleshkovsky's rapid-fire prose reveals intricate insights into late Soviet politics, culture, science, and daily life. The deeply problematic narrators of both novellas will introduce you to a Soviet Union you hadn't suspected existed. Michael Gordin, Princeton University

Thanks to the author’s vision and the translator’s talent, the text survives its emigration. Los Angeles Review of Books

They hold up reasonably well even long after the fall of the regime. The Complete Review

Yuz Aleshkovsky was born in 1929 in Krasnoyarsk and grew up in Moscow. He served in the Soviet navy and was imprisoned from 1950 to 1953 for “violating discipline.” He published children’s books but became best known for his songs and novels circulated in samizdat before he emigrated to the United States in 1979. His works in English include The Hand (1989) and Kangaroo (1999).

Duffield White is professor emeritus of Russian, East European, and Eurasian studies at Wesleyan University. He is the translator of Tolstoi in the Sixties by Boris Eikhenbaum (1982).

Susanne Fusso is Marcus L. Taft Professor of Modern Languages and professor of Russian, East European, and Eurasian studies at Wesleyan University. She is the translator of Trepanation of the Skull by Sergey Gandlevsky (2014).