Ocean of Milk, Ocean of Blood

A Mongolian Monk in the Ruins of the Qing Empire 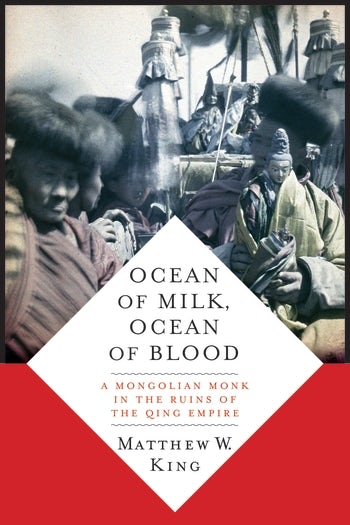 Ocean of Milk, Ocean of Blood

A Mongolian Monk in the Ruins of the Qing Empire

After the fall of the Qing empire, amid nationalist and socialist upheaval, Buddhist monks in the Mongolian frontiers of the Soviet Union and Republican China faced a chaotic and increasingly uncertain world. In this book, Matthew W. King tells the story of one Mongolian monk’s efforts to defend Buddhist monasticism in revolutionary times, revealing an unexplored landscape of countermodern Buddhisms beyond old imperial formations and the newly invented national subject.

Ocean of Milk, Ocean of Blood takes up the perspective of the polymath Zawa Damdin (1867–1937): a historian, mystic, logician, and pilgrim whose life and works straddled the Qing and its socialist aftermath, between the monastery and the party scientific academy. Drawing on contacts with figures as diverse as the Dalai Lama, mystic monks in China, European scholars inventing the field of Buddhist studies, and a member of the Bakhtin Circle, Zava Damdin labored for thirty years to protect Buddhist tradition against what he called the “bloody tides” of science, social mobility, and socialist party antagonism. Through a rich reading of his works, King reveals that modernity in Asia was not always shaped by epochal contact with Europe and that new models of Buddhist life, neither imperial nor national, unfolded in the post-Qing ruins. The first book to explore countermodern Buddhist monastic thought and practice along the Inner Asian frontiers during these tumultuous years, Ocean of Milk, Ocean of Blood illuminates previously unknown religious and intellectual legacies of the Qing and offers an unparalleled view of Buddhist life in the revolutionary period.

This is not merely an intellectual history; it is religious studies at its best. Ocean of Milk, Ocean of Blood establishes a new paradigm in the study of Buddhist Asia, showcasing both how to study countermodern Buddhism and what it reveals. Johan Elverskog, author of Buddhism and Islam on the Silk Road

King's obviously deep exposure to and grasp of a wide range of theoretical readings has made him alert and attentive to fields beyond his immediate interests in Mongolian and Tibetan Buddhist religion and society. This book combines effective argumentation, solid evidence, and a lyrical quality rare in specialized monographs. Gray Tuttle, coeditor of Sources of Tibetan Tradition

King’s brilliant book reshapes our understanding of the countermodern response of postimperial Geluk monasticism in the disenchanted world of the Mongol frontiers of the Qing. This beautifully written and theoretically sophisticated book makes a historiographically significant contribution to scholarship on early twentieth-century Inner Asian Buddhism. Vesna A. Wallace, editor of Buddhism in Mongolian History, Culture, and Society

Matthew W. King is assistant professor in transnational Buddhism in the Department of Religious Studies at the University of California, Riverside.