On My Country and the World 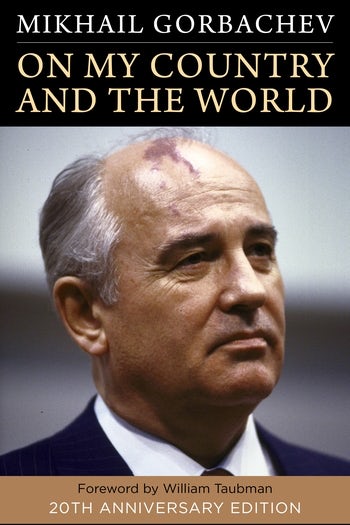 On My Country and the World

Here is the whole sweep of the Soviet experiment and experience as told by its last steward. Drawing on his own experience, rich archival material, and a keen sense of history and politics, Mikhail Gorbachev speaks his mind on a range of subjects concerning Russia's past, present, and future place in the world. Here is Gorbachev on the October Revolution, Gorbachev on the Cold War, and Gorbachev on key figures such as Lenin, Stalin, and Yeltsin.

The book begins with a look back at 1917. While noting that tsarist Russia was not as backward as it is often portrayed, Gorbachev argues that the Bolshevik Revolution was inevitable and that it did much to modernize Russia. He strongly argues that the Soviet Union had a positive influence on social policy in the West, while maintaining that the development of socialism was cut short by Stalinist totalitarianism. In the next section, Gorbachev considers the fall of the USSR. What were the goals of perestroika? How did such a vast superpower disintegrate so quickly? From the awakening of ethnic tensions, to the inability of democrats to unite, to his own attempts to reform but preserve the union, Gorbachev retraces those fateful days and explains the origins of Russia's present crises.

But Gorbachev does not just train his critical eye on the past. He lays out a blueprint for where Russia needs to go in the twenty-first century, suggesting ways to strengthen the federation and achieve meaningful economic and political reforms. In the final section of the book, Gorbachev examines the "new thinking" in foreign policy that helped to end the Cold War and shows how such approaches could help resolve a range of crises, including NATO expansion, the role of the UN, the fate of nuclear weapons, and environmental problems. On My Country and the World reveals the unique vision of a man who was a powerful actor on the world stage and remains a keen observer of Russia's experience in the twentieth century.

This anniversary edition features a new foreword by William Taubman, award-winning biographer of Khrushchev and Gorbachev.
Foreword to the Twentieth Anniversary Edition, by William Taubman
Part I: The October Revolution: Its Sense and Significance
1. A Blunder of History, Accident, or Necessity?
2. Was Socialism Built in the Soviet Union?
3. Let’s Not Oversimplify! A Balance Sheet of the Soviet Years
4. October and the World
5. One More Balance Sheet: Something Worth Thinking About
6. October and Perestroika
7. Does Socialism Have a Future?
8. Summing Up
Part II: The Union Could Have Been Preserved
9. A Tragic Turn of Events
10. Tbilisi . . . Baku . . . Vilnius
11. Toward a New Union Treaty
12. Referendum on the Union
13. The Coup: A Stab in the Back—and the Intrigues of Yeltsin
14. The Belovezh Accord: Dissolution of the USSR
15. What Lies Ahead?
Part III: The New Thinking: Yesterday, Today, and Tomorrow
16. The Sources of the New Thinking
17. The Very First Steps
18. The Conception (1985–1991)
19. Overcoming the Cold War
20. The Transitional World Order
21. The New Thinking in the Post-Confrontational World
22. The Challenge of Globalization
23. The Challenge of Diversity
24. The Challenge of Global Problems
25. The Challenge of Power Politics
26. The Challenge of Democracy
27. The Challenge of Universal Human Values
28. The Beginning of History?
Index

Mikhail Gorbachev was general secretary of the Communist Party of the Soviet Union, 1985–1991, and president of the Soviet Union, 1988–1991. He founded and directed the Gorbachev Foundation in Moscow. He is also the author of Perestroika and Soviet-American Relations, The Search for a New Beginning: Developing a New Civilization, and The August Coup: The Truth and the Lessons.

George Shriver has translated and edited many books, including Nikolai Bukharin's How It All Began: The Prison Novel and Roy Medvedev's On Soviet Dissent, The October Revolution, Let History Judge, and Post-Soviet Russia (all published by Columbia).

William Taubman is the Bertrand Snell Professor of Political Science Emeritus at Amherst College. He is the author of Khrushchev: The Man and His Era (2003), winner of the Pulitzer Prize and the National Book Critics Circle Award for biography, and Gorbachev: His Life and Times (2017).