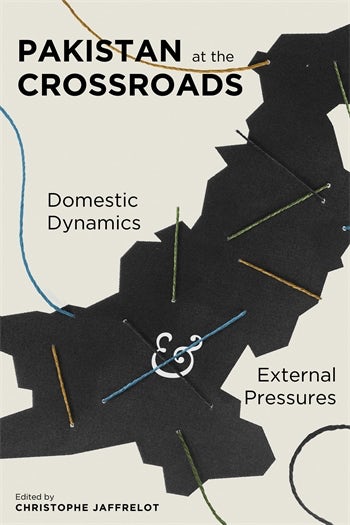 In Pakistan at the Crossroads, top international scholars assess Pakistan's politics and economics and the challenges faced by its civil and military leaders domestically and diplomatically. Contributors examine the state's handling of internal threats, tensions between civilians and the military, strategies of political parties, police and law enforcement reform, trends in judicial activism, the rise of border conflicts, economic challenges, financial entanglements with foreign powers, and diplomatic relations with India, China, Iran, Saudi Arabia, Afghanistan, and the United States.

In addition to ethnic strife in Baluchistan and Karachi, terrorist violence in Pakistan in response to the American-led military intervention in Afghanistan and in the Federally Administered Tribal Areas by means of drones, as well as to Pakistani army operations in the Pashtun area, has reached an unprecedented level. There is a growing consensus among state leaders that the nation's main security threats may come not from India but from its spiraling internal conflicts, though this realization may not sufficiently dissuade the Pakistani army from targeting the country's largest neighbor. This volume is therefore critical to grasping the sophisticated interplay of internal and external forces complicating the country's recent trajectory.

Pakistan at the Crossroads is a fresh and important contribution to the understanding of Pakistan, a country that for the foreseeable future will remain critical both to the struggle with Islamist extremism and to the geopolitics of Asia. Anatol Lieven, Georgetown University Qatar, author of Pakistan: A Hard Country

Pakistan at the Crossroads provides a diverse collection of articles from a vast array of reputable scholars who have a deep understanding of and knowledge about Pakistan. The contributors imaginatively and incisively venture to explain the disabilities, constraints, and missed opportunities of Pakistani civil and military regimes that could reinvigorate deliberation and dialogue. This multiplicity of views and interpretations and the multidisciplinary content and analysis is the real strength of this multiauthored work. Saeed Shafqat, president, Population Association of Pakistan

[Pakistan at the Crossroads] provides detailed insight into the myriad internal challenges facing Pakistan and the tensions characterizing its diplomatic relations with neighbors and Great Powers.... useful for anyone who wants to understand the reasons behind Pakistan's current predicament.... Recommended, Choice

This volume, written by eminent scholars on Pakistan, is an interesting addition to the already burgeoning literature on Pakistan since 9/11. It brings to light various domestic and external aspects of Pakistan based on recent developments. Pacific Affairs

Acknowledgments
Introduction: Pakistan, the Interface State, by Christophe Jaffrelot
Part I: The Domestic Scene
1. The Military and Democracy, by Aqil Shah
2. The Operational Dynamics of Political Parties in Pakistan, by Muhammad Waseem
3. The Judiciary as a Political Actor, by Philip Oldenburg
4. Turmoil in the Frontier, by Mariam Abou Zahab
5. Internal Security Issues in Pakistan: Prospects of Police and Law Enforcement Reform, by Hassan Abbas
6. Pakistan's Economy: Domestic Dissent and Foreign Reliance, by Shahid Javed Burki and Dann Naseemullah
Part II: The International Dimensions
7. Pakistan-Afghan Relations Since 2001: There Are No Endgames, by Avinash Paliwal
8. U.S.-Pakistan Relations Under Obama: Resilience of Clientelism?, by Christophe Jaffrelot
9. Pakistan-China Symbiotic Relations, by Farah Jan and Serge Granger
10. Pakistan Between Saudi Arabia and Iran: Islam in the Politics and Economics of Western Asia, by Sana Haroon
List of Contributors
Index

Christophe Jaffrelot is research director at the Centre de recherches internationales (CERI) and Centre national de la recherche scientifique (CNRS). He teaches South Asian politics at Sciences Po (Paris) and King's College (London). His books on Pakistan include Pakistan: Nationalism Without a Nation? (2002), A History of Pakistan and Its Origins (2004), and The Pakistan Paradox: Instability and Resilience (2015).