The Politics of Pornography and the Rise of the New Right 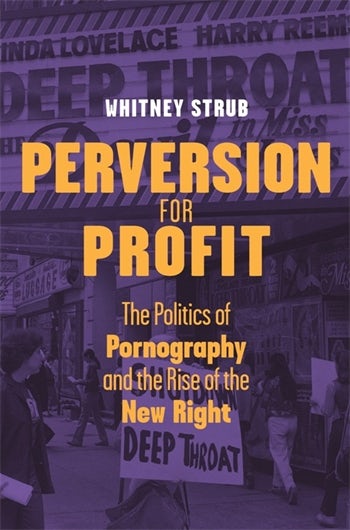 The Politics of Pornography and the Rise of the New Right

While America is not alone in its ambivalence toward sex and its depictions, the preferences of the nation swing sharply between toleration and censure. This pattern has grown even more pronounced since the 1960s, with the emergence of the New Right and its attack on the "floodtide of filth" that was supposedly sweeping the nation. Antipornography campaigns became the New Right's political capital in the 1960s, laying the groundwork for the "family values" agenda that shifted the country to the right.

Perversion for Profit traces the anatomy of this trend and the crucial function of pornography in constructing the New Right agenda, which has emphasized social issues over racial and economic inequality. Conducting his own extensive research, Whitney Strub vividly recreates the debates over obscenity that consumed members of the ACLU in the 1950s and revisits the deployment of obscenity charges against purveyors of gay erotica during the cold war, revealing the differing standards applied to heterosexual and homosexual pornography. He follows the rise of the influential Citizens for Decent Literature during the 1960s and the pivotal events that followed: the sexual revolution, feminist activism, the rise of the gay rights movement, the "porno chic" moment of the early 1970s, and resurgent Christian conservatism, which now shapes public policy far beyond the issue of sexual decency.

Strub also examines the ways in which the left failed to mount a serious or sustained counterattack to the New Right's use of pornography as a political tool. As he demonstrates, this failure put the Democratic Party at the mercy of Republican rhetoric. In placing debates about pornography at the forefront of American postwar history, Strub revolutionizes our understanding of sex and American politics.

[Strub] conveys how pornography comes into contact with greater narratives of obscenity, permissiveness, sexuality, and gender. It is apparent from [his] accounts how pornography is a vital and rich subject for analyzing a range of social pressures and competing narratives. H-Histsex

Perversion for Profit situates the pornography battles within the tricky ideological crosscurrents of the culture war. David T. Courtwright, Journal of American History

Strub does a masterful job of making the complicated postwar legal history of the shifting definitions of obscenity clear in a nuanced analysis that is always attentive to issues of gender and sexuality. David K. Johnson, American Historical Review

Well-researched and wide-ranging.... [Perversion for Profit] deserves accolades for charting conservatism's ongoing affair with pornography and convincingly demonstrating the centrality of sexuality to an understanding of modern political history. Gillian Frank, Journal of the History of Sexuality

Read an excerpt from the chapter, >"Arousing the Public: Citizens for Decent Literature and the Emergence of the Modern Antiporn Movement". (pdf)

Whitney Strub is an assistant professor of history at Rutgers University, Newark. His writing has appeared in American Quarterly, Journal of the History of Sexuality, Journal of Social History, PopMatters, and Bad Subjects. He lives in Center City, Philadelphia.