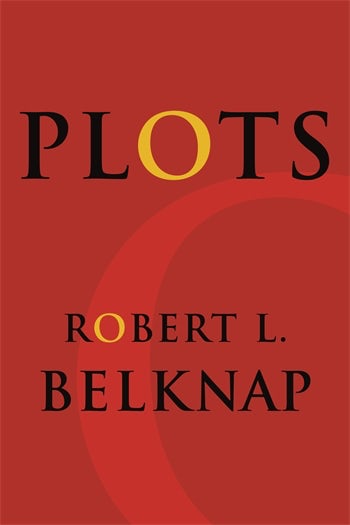 Robert L. Belknap's theory of plot illustrates the active and passive roles literature plays in creating its own dynamic reading experience. Literary narrative enchants us through its development of plot, but plot tells its own story about the making of narrative, revealing through its structures, preoccupations, and strategies of representation critical details about how and when a work came into being.

Through a rich reading of Shakespeare's King Lear and Dostoevsky's Crime and Punishment, Belknap explores the spatial, chronological, and causal aspects of plot, its brilliant manipulation of reader frustration and involvement, and its critical cohesion of characters. He considers Shakespeare's transformation of dramatic plot through parallelism, conflict, resolution, and recognition. He then follows with Dostoevsky's development of the rhetorical and moral devices of nineteenth-century Russian fiction, along with its epistolary and detective genres, to embed the reader in the murder Raskolnikov commits. Dostoevsky's reinvention of the psychological plot was profound, and Belknap effectively challenges the idea that the author abused causality to achieve his ideological conclusion. In a final chapter, Belknap argues that plots teach us novelistic rather than poetic justice. Operating according to their own logic, plots provide us with a compelling way to see and order our world.

Plots is an almost perfect book by one of this country's great scholar-teachers on why the literary art of arranging episodes matters to us. Not only luminously smart but also perfectly plotted (Robert L. Belknap's model plot-mongers are Shakespeare and Dostoevsky), each detail of the book's structure, chronological argument, and diction conspire to create that rare work of criticism: a story we cannot put down. Caryl Emerson, Princeton University

Plots is a brilliant piece of work, well-written, and insightful—a sheer pleasure to follow. Belknap's definitions of the terms of Russian formalism are clearer than anyone else's, and his sense of what they suggest is richer. Gary Morson, Northwestern University

Plots has an adamantine quality, as if decades of thought and teaching were being crystallized and enormously compressed.... Plots reveals that with Belknap's death, we lost a critic and literary historian of great power and considerable ingenuity. Scott McLemee, Inside Higher Ed

You may never look at a story the same way again after reading Robert Belknap's incisively clear and illuminating book, titled simply, Plots. The Fictional 100

A valuable addition to the scholarship on plot and narration Choice

A new perspective on literary plotting, grounded in a philosophy of the lie. Lying is beautiful because it invents and because it implicitly calls forth a better world. It is only after the lie that truth becomes valuable – before then, it’s but a paltry thing, hardly worth the telling. Andre van Loon, Review 31

Preface
Introduction, by Robin Feuer Miller
Part I. Literary Plots Deserve Still More Study
1. Plots Arrange Literary Experience
2. Plot Summaries Need More Serious Study
3. The Fabula Arranges the Events in the World the Characters Inhabit; the Siuzhet Arranges the Events in the World the Reader Encounters in the Text
4. Authors Can Relate One Incident to Another Only Chronologically, Spatially, Causally, Associatively, or Narratively
5. Plots are Fractal, Formed from Incidents That Are Formed from Smaller, Similarly Shaped Incidents
6. The Best Authorities Consider Plots and Incidents to Be Tripartite, with a Situation, a Need, and an Action
7. But Siuzhets and the Incidents That Form Them Have Two Parts: An Expectation and Its Fulfillment or Frustration
Part II. The Plot of King Lear Operates Purposefully But Also Reflects the Creative Process
8. For Integrity of Impact, Stages, Actors, and the Audience Need a Unity of Action
9. Shakespeare Replaced the Greek Unity of Action with a New Thematic Unity Based on Parallelism
10. Shakespeare Uses Conflict, the Righting of Wrongs, the Healing of an Inruption or Disruption, and Other Standard Plotting Devices, But His Recognition Scenes Move Us Most
11. Shakespeare Prepares for His Recognition Scenes with Elaborate Lies
12. In King Lear, Shakespeare Uses Elaborated Lies to Psychologize the Gloucester Subplot
13. Tolstoy and Tate Preferred the Comforting Plots of Lear's Sources to Shakespeare's, But Shakespeare Had Considered That Variant and Rejected It
Part III. The Plot of Crime and Punishment Draws Rhetorical and Moral Power from the Nature of Novel Plots and from the European and Russian Tradition Dostoevsky Inherited and Developed
14. European Novelists Elaborated or Assembled Incidents into Plots Long Before Critics Recognized the Sophistication of the New Genre in Plotting Such Subgenres as the Letter Novel and the Detective Novel
15. Dostoevsky Shaped and Was Shaped by the Russian Version of the Nineteenth-Century Novel
16. In Reinventing the Psychological Plot, Dostoevsky Challenged the Current Literary Leaders
17. The Siuzhet of Part 1 of Crime and Punishment Programs the Reader to Read the Rest and to Participate Actively in a Vicious Murder
18. The One-Sidedness of Desire and Violence in Crime and Punishment Is More Peculiar to Dostoevsky's Plotting Than Dostoevshchina
19. Critics Often Attack Crime and Punishment for a Rhetoric That Exploits Causality in Ways They Misunderstand
20. The Epilogue of Crime and Punishment Crystallizes Its Ideological Plot
21. The Plots of Novels Teach Novelistic Justice, Not Poetic Justice
Bibliography
Index
Works by Robert Belknap