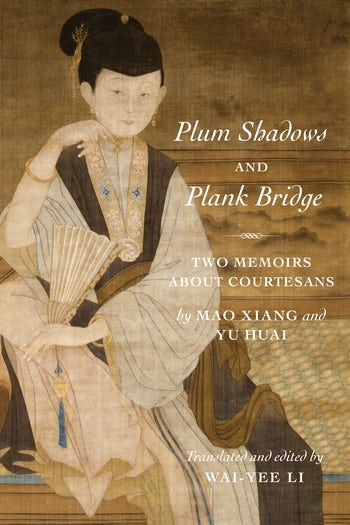 Amid the turmoil of the Ming-Qing dynastic transition in seventeenth-century China, some intellectuals sought refuge in romantic memories from what they perceived as cataclysmic events. This volume presents two memoirs by famous men of letters, Reminiscences of the Plum Shadows Convent by Mao Xiang (1611–93) and Miscellaneous Records of Plank Bridge by Yu Huai (1616–96), that recall times spent with courtesans. They evoke the courtesan world in the final decades of the Ming dynasty and the aftermath of its collapse.

Mao Xiang chronicles his relationship with the courtesan Dong Bai, who became his concubine two years before the Ming dynasty fell. His mournful remembrance of their life together, written shortly after her early death, includes harrowing descriptions of their wartime sufferings as well as idyllic depictions of romantic bliss. Yu Huai offers a group portrait of Nanjing courtesans, mixing personal memories with reported anecdotes. Writing fifty years after the fall of the Ming, he expresses a deep nostalgia for courtesan culture that bears the toll of individual loss and national calamity. Together, they shed light on the sensibilities of late Ming intellectuals: their recollections of refined pleasures and ruminations on the vagaries of memory coexist with political engagement and a belief in bearing witness. With an introduction and extensive annotations, Plum Shadows and Plank Bridge is a valuable source for the literature of remembrance, the representation of women, and the social role of intellectuals during a tumultuous period in Chinese history.

Wai-yee Li’s translations of these famous Chinese memoirs of romantic brio and pathos from the seventeenth century are a marvel of precision, elegance, and wit—a perfect match for the book’s sensual, tragic contents. Her brilliant annotations and supplemental translations help unlock a whole lost historical world of incomparable richness. Judith Zeitlin, University of Chicago

The translation is masterful. Wai-yee Li is most assuredly one of the world’s foremost experts on this subject and does an exemplary job of maintaining each text’s distinctive voices and overall tone. These works are good reads, hugely influential and valuable, and contrasting examples of an important genre heretofore scantly represented and poorly understood in the English-speaking world. Andrew Schoenbaum, University of Maryland

These memoirs are unique in world literature. The courtesans at the center of these pieces were masters of literati culture, and around them gathered some of the most famous literati in a time of impending doom. Wai-yee Li’s translations are accurate, well-annotated, and read smoothly. Few scholars can match her understanding of the language of these texts, which deserve to be read by a wide audience. Keith McMahon, Kansas University

An elegant and erudite translation of iconic texts introducing the men and women of the Ming-Qing transition period, this volume evokes the richly imagined world of the Jiangnan courtesan through the words of her male admirers. Plum Shadows and Plank Bridge provides essential reading for courses on China's seventeenth century. Tobie Meyer-Fong, Johns Hopkins University

Wai-yee Li is professor of Chinese literature at Harvard University. Her publications include Women and National Trauma in Late Imperial Chinese Literature (2014) and The Columbia Anthology of Yuan Drama (Columbia, 2014).