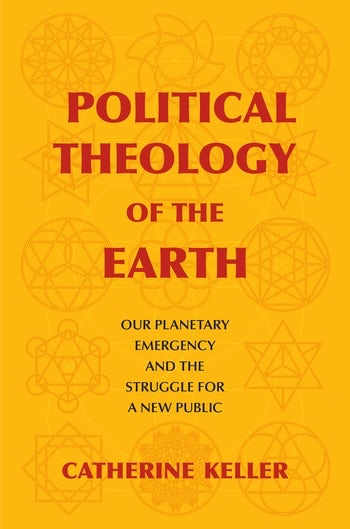 Amid melting glaciers, rising waters, and spreading droughts, Earth has ceased to tolerate our pretense of mastery over it. But how can we confront climate change when political crises keep exploding in the present? Noted ecotheologian and feminist philosopher of religion Catherine Keller reads the feedback loop of political and ecological depredation as secularized apocalypse. Carl Schmitt’s political theology of the sovereign exception sheds light on present ideological warfare; racial, ethnic, economic, and sexual conflict; and hubristic anthropocentrism. If the politics of exceptionalism are theological in origin, she asks, should we not enlist the world’s religious communities as part of the resistance?

Keller calls for dissolving the opposition between the religious and the secular in favor of a broad planetary movement for social and ecological justice. When we are confronted by populist, authoritarian right wings founded on white male Christian supremacism, we can counter with a messianically charged, often unspoken theology of the now-moment, calling for a complex new public. Such a political theology of the earth activates the world’s entangled populations, joined in solidarity and committed to revolutionary solutions to the entwined crises of the Anthropocene.

How is a political theology of the earth distinctive? It resists the hegemony of those theologies (and post-theologies) organized around divine omnipotence, absolute sovereignty, and human dominion over the earth. Doing so, it can now mine rich veins in traditions that explore liveliness beyond the human and human entanglements with a multifaceted, morphing earth. In this inspiring book Keller calls upon eco-activists to explore the spiritual affinities between us, as we foment energies needed to respond to the Anthropocene. An indispensable book for today! William E. Connolly, author of Facing the Planetary: Entangled Humanism and the Politics of Swarming

In this brilliant, wonderfully evocative, and beautifully written book, one of the very best theologians in the world today engages seculareligious currents in political theology to remarkable effect. Her theology of divine entanglement counters a political theology of the exception in a thoroughgoing way: anthropic exceptionalism, for example, comes completely undone. Its apophatic dimensions, meanwhile, steer clear of the certainties of optimism or despair to offer a hope without guarantees in the face of climate crisis. No one can question the way social justice and ecological sustainability are inextricably linked after reading Keller’s political theology of the earth. Kathryn Tanner, author of Christianity and the New Spirit of Capitalism

The political, the earth, their theology, encapsulated in a meditation mindful of the unmined mind-bending darkness of the deep, a calming call to think, an urgent call to act in the face of the darkness of planetary peril, all in a lyrical, profoundly theological—make that theopoetic—voice. What else is that than a new book by Catherine Keller? What more could we ask for? John D. Caputo, coauthor of After the Death of God

Into this contracted spacetime of racist convulsion, ecological disaster, and nuclear machismo, Keller drops a political theology that both introduces and breaks open the field. Framed as a transdisciplinary triptych, Political Theology of the Earth summons an enraged, counter-creative swarm to counter the politics of exception with multifarious practices of inception. Mary-Jane Rubenstein, author of Pantheologies: Gods, Worlds, Monsters

With marvelous economy and scholarly brilliance, Catherine Keller offers here the beauty and complexity of her practical wisdom. It is no easy thing to guide others into uncertainty and unsaying as modes of theological and political understanding, let alone an activism that takes seriously the truly vulnerable in and of the earth. This book is an indispensable introduction to political theology, one in which our understanding of divinity can be neither reduced to human politicking nor exempted from the urgent crises of our time. Laurel C. Schneider, author of Beyond Monotheism: A Theology of Multiplicity

Perhaps only Catherine Keller could publish a work of political, theology, process theology, and eco-theology that is also highly readable. Keller is our era’s poet theologian, modeling a way to push through academic jargon and out the other side with prose that pops. For this reason alone, it’s worth picking up this book. . . . Keller makes one of the most compelling cases yet for a progressive theology that doesn’t recede with the overtaking of secularity but is more precisely revealed in the undertaking of it. Clint Schnekloth, The Christian Century

Keller's political theology of the Earth is breathtaking in the scope of the resources it draws upon and the depths of its analysis...Just read it, and when you fail, enfold yourself into the cosmic process and read it again. That's certainly what I'm going to do. Marian Ronan, National Catholic Reporter

Keller argues that there is a way of thinking with the resources of Christianity that allows one to hope. Reading Religion

Catherine Keller is professor of constructive theology at the Theological School of Drew University. Her books include Cloud of the Impossible: Negative Theology and Planetary Entanglement (Columbia, 2014).