Authors and Saints in Renaissance Italy 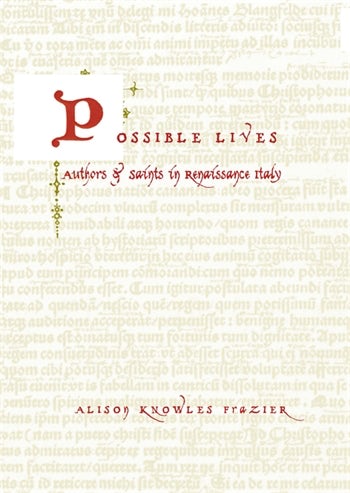 Authors and Saints in Renaissance Italy

Possible Lives uses the saints'lives written by humanists of the Italian Renaissance to explore the intertwining of classical and religious cultures on the eve of the European Reformation. The lives of saints were among the most reproduced and widely distributed literatures of medieval and early modern Europe. During the century before the Reformation, these narratives of impossible goodness fell into the hands of classicizing intellectuals known as humanists. This study examines how the humanist authors received, criticized, and rewrote the traditional stories of exemplary virtue for patrons and audiences who were surprisingly open to their textual experiments.

Drawn from a newly constructed catalog of primary sources in manuscript and print, the cases in this book range from the lure of martyrdom as the West confronted Islam to the use of saints'lives in local politics and the rhetorician's classroom. Frazier discusses the writers'perceptions of historical sanctity, the commanding place of the mendicant friars, and one unique account of a contemporary holy woman.

Possible Lives shows that the classical Renaissance was also a saintly Renaissance, as humanists deployed their rhetorical and philological skills to "renew the persuasive force of Christian virtue" and "save the cult of the saints." Combining quantitative and anecdotal approaches in a highly readable series of case studies, Frazier reveals the contextual richness of this little-known and unexpectedly large body of Latin hagiography.

Introduction: Authors, Saints and Texts
A Renaissance of Martyrs
The Last Medieval Legendary
The Teacher's Saints
The Spectacle of a Woman's Devotion
The Saint as Author
Conclusion

Alison Knowles Frazier is an associate professor of history at the University of Texas, Austin and a fellow of the American Academy in Rome.