Scientific and Social Inquiry After Representationalism 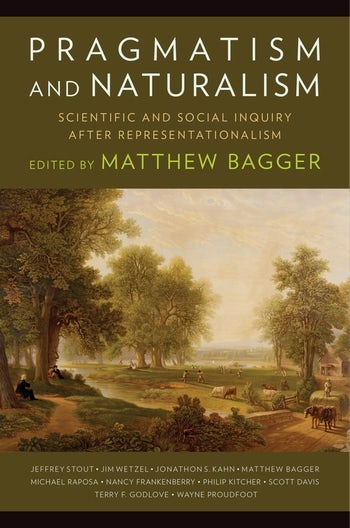 Scientific and Social Inquiry After Representationalism

Most contemporary philosophers would call themselves naturalists, yet there is little consensus on what naturalism entails. Long signifying the notion that science should inform philosophy, debates over naturalism often hinge on how broadly or narrowly the terms nature and science are defined. The founding figures of American Pragmatism—C. S. Peirce (1839–1914), William James (1842–1910), and John Dewey (1859–1952)—developed a distinctive variety of naturalism by rejecting reductive materialism and instead emphasizing social practices. Owing to this philosophical lineage, pragmatism has made original and insightful contributions to the study of religion as well as to political theory.

This book is a stellar collection of many of the most brilliant and influential philosophers engaged with pragmatism and naturalism. The revival of pragmatism—after its emergence forty years ago—continues in new and nuanced ways as manifest in this gem of a text! Cornel West, Professor of the Practice of Public Philosophy, Harvard University

This collection of fresh and original papers dealing with pragmatism, naturalism, and religion is great tribute to Wayne Proudfoot, whose writings have inspired a generation of thinkers. Splendid essays deal with Peirce, James, and Dewey as well as with recent debates concerning democracy, the study and philosophy of religion, and the future of pragmatic naturalism. Richard J. Bernstein, Vera List Professor of Philosophy, New School for Social Research

This collection shows that many contemporary pragmatist philosophers, like their predecessors Peirce, James, and Dewey, are committed to varieties of antirepresentationalist naturalism, which should be distinguished as clearly from reductive physicalism as it is from absolutisms both religious and rationalist. Bagger’s commentaries, like the essays themselves, are lucid, instructive, and provocative interventions in ongoing debates about the meaning and significance of pragmatism. James Kloppenberg, Charles Warren Professor of American History, Harvard University

For anyone interested in the nuances of pragmatic naturalism and the study of religion, this is a must-have collection. The reader learns something on every page. Matthew Bagger has done a magnificent job in gathering this fascinating array of thinkers on the subject. Eddie S. Glaude Jr., James S. McDonnell Distinguished University Professor, Princeton University

The contributors to Pragmatism and Naturalism address several interwoven questions, ones of great contemporary interest, and address these questions in an erudite, thoughtful, and imaginative manner. In doing so, they clarify not only the meaning of pragmatism and naturalism (no small achievement apart from all else) but also illuminate the meaning of religion itself in light of what pragmatism and naturalism mean for us today. Vincent Colapietro, Pennsylvania State University and the Center for the Humanities at URI

The essays in Pragmatism and Naturalism are excellent examples of the genre by top-notch scholars that speak well to each other and, without question, significantly advance the cause of pragmatism in philosophy, in political theory, and in religious studies. Bagger’s essay on the elective affinity between pragmatism and religious naturalism is both conceptually clear and historically rich, and the essays by Proudfoot and Stout read as mature and polished position pieces by solidly established voices in their respective fields. Andrew Dole, Amherst College

Part 4: Pragmatism and the Philosophy of Religion
8. The Fate of Radical Empiricism and the Future of Pragmatic Naturalism
Nancy Frankenberry
9. Nonconceptualism and Religious Experience: Kant, Schleiermacher, Proudfoot
Terry F. Godlove
10. The Oracle and the Inner Teacher: Piecemeal Naturalism
James Wetzel

Matthew Bagger teaches in the Department of Religious Studies at the University of Alabama. He is the author of Religious Experience, Justification, and History (1999) and The Uses of Paradox: Religion, Self-Transformation, and the Absurd (Columbia, 2007).