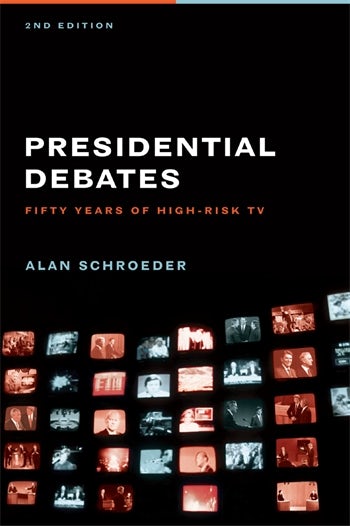 Alan Schroeder's popular history now covers the 2000 Bush-Gore and 2004 Bush-Kerry debates, including innovations in format and press coverage, and adds new research on televised debates since 1960. Schroeder organizes his book according to a television production timeline, highlighting the importance of pre- and postdebate periods, as well as the live telecasts themselves. He describes production in painstaking detail, from the selection of questioners to camera angles, from makeup to lighting and set design.

Televised debates represent a rare departure from well-choreographed campaigns, and new media such as YouTube continue to reshape form and content. Conducting interviews with journalists and industry insiders, and drawing on his own experience as an award-winning reporter and television producer, Schroeder delivers a fascinating backstage tour of every aspect of debate performance.

Schroeder's 'tour' is a good one, sparked by lively writing and an eye for telling details. Publishers Weekly

The most compulsive read in recent times on how and why we elect our national leaders. San Francisco Chronicle

Alan Schroeder, a professor in the School of Journalism at Northeastern University, has written extensively about the relationship between presidential politics and the media. He has also worked as a journalist, television producer, and diplomat.