Antonio Gramsci. Edited and translated by Joseph A. Buttigieg. 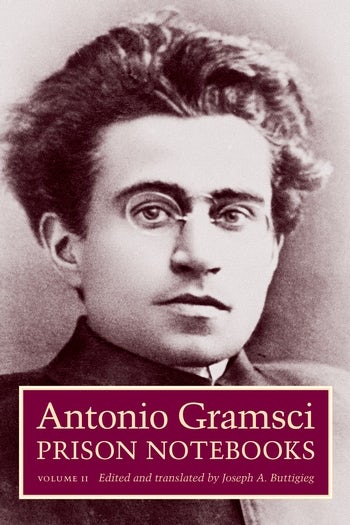 Antonio Gramsci. Edited and translated by Joseph A. Buttigieg.

Antonio Gramsci (1891-1937) is widely celebrated as the most original political thinker in Western Marxism and an all-around outstanding intellectual figure. Arrested and imprisoned by the Italian Fascist regime in 1926, Gramsci died before fully regaining his freedom. Nevertheless, in his prison notebooks, he recorded thousands of brilliant reflections on an extraordinary range of subjects, establishing an enduring intellectual legacy.

Columbia University Press's multivolume Prison Notebooks is the only complete critical edition of Antonio Gramsci's seminal writings in English. The notebooks' integral text gives readers direct access not only to Gramsci's influential ideas but also to the intellectual workshop where those ideas were forged. Extensive notes guide readers through Gramsci's extraordinary series of reflections on an encyclopedic range of topics. Volume 2 contains Gramsci's notebooks 3, 4, and 5, written between 1930 and 1932. Their central themes are popular culture, Italian history, Americanism, and the Catholic Church as a religious institution and formidable politico-ideological force. Gramsci also touches on the Renaissance and Reformation, language and linguistics, military and diplomatic history, and Japanese and Chinese culture. Notebook 4 features an innovative reading of canto 10 from Dante's Inferno and a philosophical analysis of materialism and idealism. It also includes the first draft of Gramsci's famous observations on the history and role of intellectuals in society.

Altogether a tremendous achievement.... This volume provides us with an immediate sense of the scale and diversity of Gramsci's project. Richard Bellamy, Times Literary Supplement

An impressive and welcome commencement to the translation of one of the great intellectual legacies of the twentieth century...in Gramsci, Marxism acquires the founder of a proletarian intellectual tradition that is likely to continue as long as society has use for democracy. William Hartley, Italian Quarterly

Joseph A. Buttigieg (1947–2019) was professor emeritus of English at the University of Notre Dame. He was the author and editor of a number of books, including A Portrait of the Artist in Different Perspective, The Legacy of Antonio Gramsci, Criticism Without Boundaries, Gramsci and Education, European Christian Democracy, and most notably the complete critical edition of Antonio Gramsci’s Prison Notebooks (Columbia, 1992–2007). He was also founding member and president of the International Gramsci Society.