The Political Uses of Massacre and Genocide 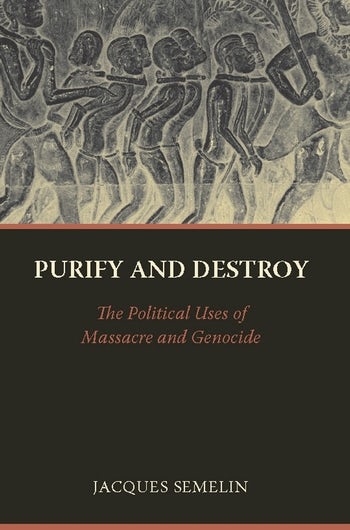 The Political Uses of Massacre and Genocide

How can we comprehend the sociopolitical processes that give rise to extreme violence, ethnic cleansing, or genocide? A major breakthrough in comparative analysis, Purify and Destroy demonstrates that it is indeed possible to compare the Holocaust, the Rwandan genocide, and ethnic cleansing in Bosnia-Herzegovina while respecting the specificities of each appalling phenomenon. Jacques Semelin achieves this, in part, by leading his readers through the three examples simultaneously, the unraveling of which sometimes converges but most often diverges.

Semelin's method is multidisciplinary, relying not only on contemporary history but also on social psychology and political science. Based on the seminal distinction between massacre and genocide, Purify and Destroy identifies the main steps of a general process of destruction, both rational and irrational, born of what Semelin terms "delusional rationality." He describes a dynamic structural model with, at its core, the matrix of a social imaginaire that, responding to fears, resentments, and utopias, carves and recarves the social body by eliminating "the enemy." Semelin identifies the main stages that can lead to a genocidal process and explains how ordinary people can become perpetrators. He develops an intellectual framework to analyze the entire spectrum of mass violence, including terrorism, in the twentieth century and before. Strongly critical of today's political instrumentalization of the "genocide" notion, Semelin urges genocide research to stand back from legal and normative definitions and come of age as a discipline in its own right in the social sciences.

This book is a major accomplishment in the study of genocide. Semelin explores the deep cause, specific triggers, political and international context, dynamics of implementation, nature of killing, and political uses of genocide as a modern phenomenon. Omer Bartov, Brown University, and author of Mirrors of Destruction: War, Genocide, and Modern Identity

[A] must-read for those who want to seriously engage the problem of genocide and massacre in rigorous and systematic fashion. Eric A. Heinze, Political Science Quarterly

This important study is well worth the effort. Robert Melson, Holocaust and Genocide Studies

Foreward by Stanley Hoffmann
Acknowledgementsintroduction: Understand?I. The Imaginary Constructs of Social DestructivenessUnpromising Avenues
The power of imaginary constructs
From the identity narrative to the figure of Traitor
From the quest for purity to the figure of the Other in excess
From the security dilemma to the destruction of the enemyII. From Inflammatory Discourse to Sacrificial ViolenceThe intellectual springboard
Reaching political legitimacy
From the religious to the sacrificial
Societies torn between adhesion, consent and resistanceIII. International Context, War and the MediaA structure of political opportunities
Spilling into war
Telling the world: a last resort?IV. The Dynamics of Mass MurderThe decision-making process and the deision-makers
The organisation of mass murder and the actors involved
From collective indifference to popular participation
Morphologies of extreme violenceV. The Vertigo of ImpunityCrossing the threshold into violence
The tipping mechanism
The dual learning process of massacre
The killers' profiles: revisiting 'the banality of evil'
Sexual violence and other atrocitiesVI. The Political Uses of Massacre and GenocideInstrumentalisations of a word that is impossible to define?
Distancing genocide studies from the frame of law
Destroying to subjugate
Destroying to eradicate
Destroying to revoltConclusion: The 'Never Again" RefrainCrisis prevention: arguments and illusions
An ethics of responsibility
'The revenge of passions'Appendices
A. Investigating a massacre
B. Comparing massacresBibliography
Notes
Name Index
Subject Index

Jacques Semelin is professor of political science and research director at CERI-CNRS in Paris. After having studied civil resistance within Nazi Europe, he developed comparative genocide research and is now exploring processes of reconciliation and prevention. His previously published book in English is Unarmed Against Hitler: Civil Resistance in Europe, 1939-1943, and he is founder of the Online Encyclopedia of Mass Violence.