Radical History and the Politics of Art 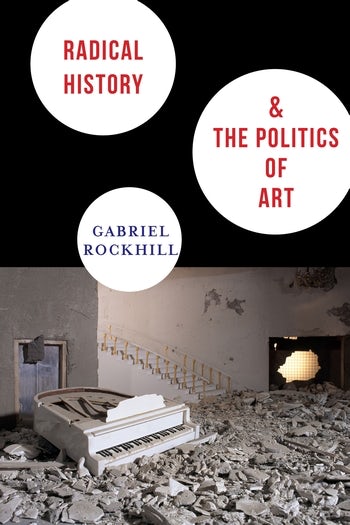 Radical History and the Politics of Art

Gabriel Rockhill opens new space for rethinking the relationship between art and politics. Rather than understanding the two spheres as separated by an insurmountable divide or linked by a privileged bridge, Rockhill demonstrates that art and politics are not fixed entities with a singular relation but rather dynamically negotiated, sociohistorical practices with shifting and imprecise borders.

Radical History and the Politics of Art proposes a significant departure from extant debates on what is commonly called "art" and "politics," and the result is an impressive foray into the force field of history, in which cultural practices are meticulously analyzed in their social and temporal dynamism without assuming a conceptual unity behind them. Rockhill thereby develops an alternative logic of history and historical change, as well as a novel account of social practices and a multidimensional theory of agency. Engaging with a diverse array of intellectual, artistic, and political constellations, this tour de force diligently maps the various interactions between different dimensions of aesthetic and political practices as they intertwine and sometimes merge in precise fields of struggle.

Direct and uncompromising in his views, Rockhill sets forward a political philosophy of aesthetics, that is at once sensuous and pragmatic. The research is based on German and French works in their original articulation, and the analyses themselves take up not what is thematic but, better, what is couched in contradiction. The book will be a strong contribution to a practical—both theoretical and historical—appreciation of aesthetics and politics. Tom Conley, Harvard University

Art feels too impossibly urgent for it not to matter to the shape of our living together; yet locating where the join between life and art is, precisely, has proved elusive. In this invaluable study, Gabriel Rockhill vanquishes the myth that either there is some privileged moment – of form, content, or effect – uniting art and politics or there is none. With subtlety and analytic rigor, Rockhill demonstrates the nexus connecting – or separating – art and politics is always bound to the dense weave of social practices located at concrete historical times in specific geographical locales. Along the way Rockhill provides a scintillating new analysis of the avant-garde, and the most acute analysis of Jacques Rancière's aesthetic theory I have come across. Anyone interested in the question of art and politics will want to read this book. J. M. Bernstein. New School for Social Research

Much has been written about the relationship between art and politics. "How may one reunite what was originally separated?" is a question that foregrounds a deep-seated sophism that is the cause of major misunderstandings, for art and politics have never been different entities and one understands nothing about art and politics as long as one thinks of them as self-contained. Gabriel Rockhill argues definitively against the "talisman complex" which is based on our spontaneously essentialist bias and on an ontology which always ends up sidestepping true analysis. As a radical historicist, he is not shy of complexity and chooses to reinstate art and artworks in social life, i.e., where they have meaning and depth. To isolationist theories and concepts he opposes an energetic interventionist strategy that is particularly welcome in the present field of concept formation. Jean-Pierre Cometti, University of Provence

In this passionate and rigorous meditation on the vexed issue of the politics of art, Gabriel Rockhill examines the theses of Wittgenstein, Sartre, Adorno, Marcuse, Lukacs, Bürger and Rancière to argue that it is as wrong to "politicize aesthetics" as to "aestheticize politics." Since neither art nor politics can be founded ontologically, this lack of transcendence brings a saving grace. Understood as a historical field of collective negotiations, art recaptures its critical edge, its activist agency, and its social relevance. Jean-Michel Rabaté, Professor of English, University of Pennsylvania

In this bold and erudite intervention into twentieth-century controversies surrounding art and politics, Rockhill dissolves a whole series of reifications, essentialisms, and other symptoms of magical thinking in a bath of 'radical historicism.' Art and politics emerge as no longer clearly defined entities but as a host of artistic and political practices, intertwined and interacting in an everchanging, ever-contested constellation of encounters and relations. Kristin Ross, New York University

We are living in a period when in many fields of humanities history is taken for granted more often than it is taken seriously. Radical History and the Politics of Art thoroughly challenges this attitude by demonstrating the subversive explanatory power of historical analysis. By considering art and politics as entirely immanent in sociohistorical practices, Rockhill argues for their multiform relationship as displayed in various temporal, geographical, and social configurations. Thus, he integrates the disciplinary priorities of a theoretician of art into a style of discourse that offers a powerful philosophical way of reading history. Radical History and the Politics of Art is elegantly written, informative, and never less than provocative. The result is a radical voice long unheard in the field of theoretical discourse on art. Ádám Takács, Eötvös Loránd University Budapest

Rockhill's book is a polemic against the various theoretical presuppositions and postures, which fatally misconstrue the relevant factors for assessing the actual agency of aesthetic practices. It is also an assertive defence of the 'politicity' of these practices.... [His] book is important because it gives exemplary attention to the factors that a competent approach to this area needs to consider. More than this, Rockhill shows that obscurity is the appropriate fate for undisciplined conceptual speculation. Notre Dame Philosophical Review

One welcomes [an] ambitious, iconoclastic work like Gabriel Rockhill's Radical History and the Politics of Art. Radical Philosophy

Rockhill's ambitious and erudite Radical History and the Politics of Art covers a sizable and variegated terrain. Pavel Lembersky, H-Socialisms

An engagingly written book that is full of insight, and which judiciously and forcefully combines readings of some of the most cited critics on art and politics in the twentieth century. As such, it makes a new, demanding inquiry into the appropriate methodology for rethinking politicized aesthetic practices. Sophie Seita, Modernism/modernity

A stimulating and forcefully argued book that clears the ground for future scholarship on the social politicity of art. SubStance