Reading The Tale of Genji

Sources from the First Millennium 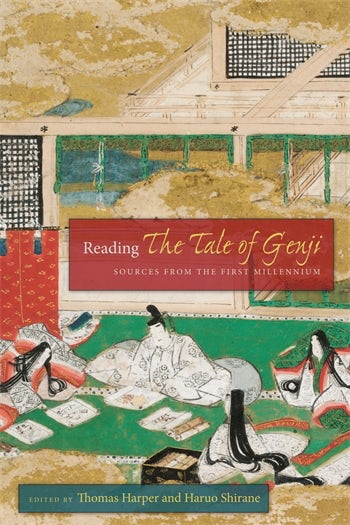 Reading The Tale of Genji

Sources from the First Millennium

The Tale of Genji, written one thousand years ago, is a masterpiece of Japanese literature, is often regarded as the best prose fiction in the language. Read, commented on, and reimagined by poets, scholars, dramatists, artists, and novelists, the tale has left a legacy as rich and reflective as the work itself.

This sourcebook is the most comprehensive record of the reception of The Tale of Genji to date. It presents a range of landmark texts relating to the work during its first millennium, almost all of which are translated into English for the first time. An introduction prefaces each set of documents, situating them within the tradition of Japanese literature and cultural history. These texts provide a fascinating glimpse into Japanese views of literature, poetry, imperial politics, and the place of art and women in society. Selections include an imagined conversation among court ladies gossiping about their favorite characters and scenes in Genji; learned exegetical commentary; a vigorous debate over the morality of Genji; and an impassioned defense of Genji's ability to enhance Japan's standing among the twentieth century's community of nations. Taken together, these documents reflect Japan's fraught history with vernacular texts, particularly those written by women.

A brilliant example of what collaboration among scholars can produce. The introductions to the work and the individual texts are clear, cogent, concise, and engaging, and the translations are very readable and display different nuances in style. This volume will surely become an essential text to the study of Genji. Sonja Arntzen, University of Toronto

This book is a treasure. The existence of such a rich tradition of Genji criticism and commentary will come as a revelation to many readers. Erudite and masterful translations bring to life the way men and women have engaged with Genji as readers, authors, and scholars over the centuries and will advance the field in significant ways. Melissa McCormick, Harvard University

The Tale of Genji is not just a novel but a millennium-long love affair between a book and its readers. Whenever courtiers, warriors, or ordinary Japanese looked back to the heyday of the imperial court, this book was the lens through which they saw it. Of course, they reacted to what they read, commenting, annotating, interpreting; some even tried to emulate it. This book authoritatively leads us through a thousand years of such commentary and interpretation, showing how the work lived and breathed through its readers' admiration. It is obligatory reading for anyone who is interested in The Tale of Genji or in the reception history of famous books. W. J. Boot, Leiden University

For centuries, The Tale of Genji has been a major source of inspiration and subject matter for Japanese artists. With the publication of this book, students of Japanese art will now have access to not only the treasure trove of visual evidence that survives but also the opinions of some of Genji's earliest readers, whose tastes and interests were decisive to the formation of the long tradition of Genji art. Mimi Gardner Gates, director emerita, Seattle Art Museum

Reading the Tale of Genji opens windows into critical words very few English-reading will have guessed even existed, exposing them to new views and visions of the big book they adore. Open Letters Monthly

Readers familiar with The Tale of Genji will find that this collection adds considerable depth to their understanding of Japanese cultural history.... Highly recommended. Choice

This detailed collection of commentaries on Japan's most famous novel allows us to see how readers over the centuries have regarded it. Tony's Reading List

Any person interested in Genji, or more broadly in the history of Japanese literature, must read this book. Michel Viellard-Baron, Journal of Japanese Studies

This book will be welcomed by scholars and students of The Tale of Genji who wish to go beyond the text itself to understand the history of its reception, and to recognize how, not unlike the Bible in the West, this remarkable work was constantly reimagined. Japan Forum

Much more could be discussed about the many texts included in this collection, but suffice it to say that there is something for just about everyone here; premodern, early modern, modern, and comparative scholars can all gain from the translations and introductions found in this volume. The two editors, the contributors, and the publisher all deserve high praise and our gratitude for providing us with this invaluable resource. Lawrence Marceau, University of Auckland, Monumenta Nipponica 72:1

Illustrations
Abbreviations
Chapter Titles of The Tale of Genji
Introduction
1. Early Discussions of Fiction
Kagero Diary, by The Mother of Michitsuna
Earlier Collected Poems of the Great Kamo Priestess, by Princess Senshi
Preface to The Illustrated Three Treasures, by Minamoto no Tamenori
The Pillow Book, by Sei Shonagon
The Tale of Genji, by Murasaki Shikibu
The Diary of Murasaki Shikibu, by Murasaki Shikibu
Sarashina Diary, by The Daughter of Sugawara no Takasue
2. Genji Gossip (Plus a Bit of Good Advice)
A Nameless Notebook
The Lists
Forty-Eight Exemplars from Genji
A Key to Genji
Exemplars from Genji
[Untitled]
The Matches
The Feelings of People in Genji: A Match (Awa no kuni bunko text)
Genji: A Contest
The Feelings of People in Genji: A Match (Suzuki manuscript)
The Women in Ise and Genji: A Match in Twelve Rounds
The Nursemaid's Letter, by Abutsu
3. Toward Canonization
Senzaishu, by Fujiwara no Shunzei and Kitamura Kigin
Poetry Contest in Six Hundred Rounds, by Fujiwara no Shunzei
"Lord Shunzei's Memorial in Japanese Script, Submitted in 1200", by Fujiwara no Shunzei
Explicating Murasaki, by Sojaku
Diary of the Juntoku Retired Emperor, by The Juntoku Retired Emperor
Full Moon Diary, by Fujiwara no Teika
Oral Transmissions of the GoToba Retired Emperor, by The GoToba Retired Emperor
Conversations with the Kyogoku Middle Counselor, by Fujiwara no Nagatsuna
Preface to Sino-Japanese Poems on The Tale of the Shining Genji
4. Obsequies for Genji
The Mirror of the Present, by Fujiwara no Tametsune
Collected Poems of the Mother of Acting Middle Counselor Lord Saneki, by The Mother of Acting Middle Counselor Lord Saneki
Collection of Fujiwara no Takanobu, by Fujiwara no Takanobu
New Imperial Collection of Poetry, by Fujiwara no Muneie
"A Dedicatory Proclamation for The Tale of Genji", by Choken
The Story of Obsequies for Genji, by Seikaku
5. The Tale of Genji Apocrypha
"Pillowed upon His Arm", by Motoori Norinaga
The "Sakurahito" Fragments
The Six "Hidden in Cloud" Chapters
The "Sumori" Fragments
"Dew on the Mountain Path"
6. Medieval Commentary
"Notes on the Rainy Night's Discussion", by Sogi
Kaoku's Gleanings, by Kaoku Gyokuei
Gyokuei's Collection, by Kaoku Gyokuei
The Moonlit Lake Commentary, by Kitamura Kigin
7. Edo-Period Treatises
Discursive Commentary on Genji, by Kumazawa Banzan
Seven Essays on Murasaki Shikibu, by Ando Tameakira
The Tale of Genji: A Little Jeweled Comb, by Motoori Norinaga
From Blossoms to Moonlight, by Matsudaira Sadanobu
A Critical Appraisal of Genji, by Hagiwara Hiromichi
8. Modern Reception
Introduction to Genji Monogatari: The Most Celebrated of the Classical Japanese Romances, by Suematsu Kencho
The Essence of the Novel, by Tsubouchi Shoyo
Preface to A New Exegesis of The Tale of Genji, by Sassa Seisetsu
"Upon Finishing Shin'yaku Genji monogatari", by Yosano Akiko
Afterword to Shin-shin'yaku Genji monogatari, by Yosano Akiko
"The Tale of Genji: The First Volume of Mr. Arthur Waley's Translation of a Great Japanese Novel by the Lady Murasaki", by Virginia Woolf
"On Reading the Classics", by Masamune Hakucho
"On Translating The Tale of Genji into Modern Japanese" Tanizaki Jun'ichiro
Index

Thomas Harper is retired from the Centre for Japanese and Korean Studies at Leiden University. He is the translator of In Praise of Shadows and other essays by Tanizaki Jun'ichiro, and the author of a number of scholarly articles on the reception of The Tale of Genji.

Haruo Shirane, Shincho Professor of Japanese Literature and Culture at Columbia University, is the author and editor of numerous books on Japanese literature, including, most recently, Japan and the Culture of the Four Seasons: Nature, Literature, and the Arts; Envisioning The Tale of Genji: Media, Gender, and Cultural Production; Traditional Japanese Literature: An Anthology, Beginnings to 1600; Early Modern Japanese Literature: An Anthology, 1600–1900; Classical Japanese: A Grammar; Traces of Dreams: Landscape, Cultural Memory, and the Poetry of Basho; and A Bridge of Dreams: A Poetics of The Tale of Genji.