Reds at the Blackboard 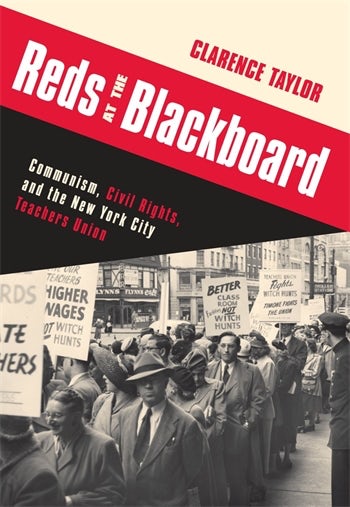 Reds at the Blackboard

The New York City Teachers Union shares a deep history with the American left, having participated in some of its most explosive battles. Established in 1916, the union maintained an early, unofficial partnership with the American Communist Party, winning key union positions and advocating a number of Party goals. Clarence Taylor recounts this pivotal relationship and the backlash it created, as the union threw its support behind controversial policies and rights movements. Taylor's research reaffirms the party's close ties with the unionyet it also makes clear that the organization was anything but a puppet of Communist power.

Reds at the Blackboard showcases the rise of a unique type of unionism that would later dominate the organizational efforts behind civil rights, academic freedom, and the empowerment of blacks and Latinos. Through its affiliation with the Communist Party, the union pioneered what would later become social movement unionism, solidifying ties with labor groups, black and Latino parents, and civil rights organizations to acquire greater school and community resources. It also militantly fought to improve working conditions for teachers while championing broader social concerns. For the first time, Taylor reveals the union's early growth and the somewhat illegal attempts by the Board of Education to eradicate the group. He describes how the infamous Red Squad and other undercover agents worked with the board to bring down the union and how the union and its opponents wrestled with charges of anti-Semitism.

In his study, Clarence Taylor...explores the nature and extent of the Communist influence. Relying on thorough research and presenting much detail, he finds that the Teachers Union (TU) indeed adopted policies of the Communist Party, but without abandoning the interests of the teachers they led. Robert D. Parmet, History News Network

...offers a highly readable and engaging story of the rise of [the Teacher's Union] model, as well as the ferocious onslaught against it during the McCarthy era. It is a must-read... Socialist Worker.org

Acknowledgments
Introduction
Part 1
1. The War Within: Battling for the Soul of the Union
2. Communist Front? The TU During the Popular Front Era
3. The Fight Over Revocation
4. To Be a Good American: The New York City Teachers Union and the Issue of Race During the Second World War
Part 2
5. The Opening Salvo: Louis Jaffe, Taft-Hartley, and Minnie Gutride
6. The First Wave of Suspensions and Dismissals
7. Banning Subversives
8. Anti-Semitism: Rhetoric and Perception
9. Undercover Agents, Informers, and Cooperating Witnesses
Part 3
10. Crusading for Civil Rights
11. Women and the Teachers Union
12. The Triumph of the United Federation of Teachers and the Demise of Social Unionism
Conclusion
Notes
Index

Clarence Taylor is professor of history and black and Latino studies at Baruch College and professor of history at the Graduate Center, City University of New York. He has written or edited several books, including The Black Churches of Brooklyn and Knocking at Our Own Door: Milton A. Galamison and the Struggle to Integrate New York City Schools.