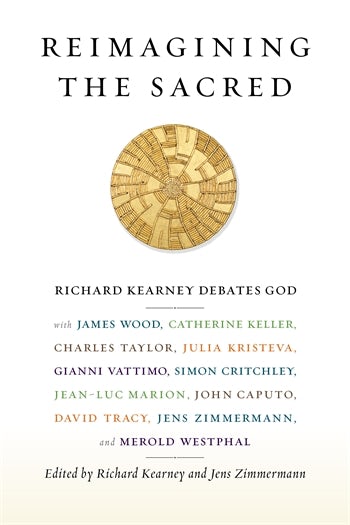 Contemporary conversations about religion and culture are framed by two reductive definitions of secularity. In one, multiple faiths and nonfaiths coexist free from a dominant belief in God. In the other, we deny the sacred altogether and exclude religion from rational thought and behavior. But is there a third way for those who wish to rediscover the sacred in a skeptical society? What kind of faith, if any, can be proclaimed after the ravages of the Holocaust and the many religion-based terrors since?

Richard Kearney explores these questions with a host of philosophers known for their inclusive, forward-thinking work on the intersection of secularism, politics, and religion. An interreligious dialogue that refuses to paper over religious difference, these conversations locate the sacred within secular society and affirm a positive role for religion in human reflection and action. Drawing on his own philosophical formulations, literary analysis, and personal interreligious experiences, Kearney develops through these engagements a basic gesture of hospitality for approaching the question of God. His work facilitates a fresh encounter with our best-known voices in continental philosophy and their views on issues of importance to all spiritually minded individuals and skeptics: how to reconcile God's goodness with human evil, how to believe in both God and natural science, how to talk about God without indulging in fundamentalist rhetoric, and how to balance God's sovereignty with God's love.

This eminently readable volume offers rich insights into the leading contemporary Continental philosophers of religion who are addressing the place of the sacred and the sacramental in the contemporary world after the supposed 'death of God' announced by Nietzsche and others. Kearney shows his hermeneutical and dialogical skills in illuminating interviews conducted with leading thinkers, including Jean-Luc Marion, Charles Taylor, Gianni Vattimo and Julia Kristeva. This book explores not just the clash between atheism and theism but the exploration of the traces of the divine, which Kearney has termed anatheism. This book serves both as a lucid introduction to contemporary Continental philosophy of religion and a guide through the complexity of the contested terrain between theists, atheists, and those who search for a credible way to articulate the sacred in everyday life. Dermot Moran, University College Dublin

This unique collection of interviews stages a critical debate among some of the most respected voices in continental thought around key aspects of Kearney's thesis. This exploration of non-fundamentalist religious belief by a group of prominent philosophers will be considered a significant contribution to the field. William Egginton, The Johns Hopkins University

A remarkable book of conversations. We learn about the influential ideas of Kearney's interlocutors. Moreover, the impressive voice of Kearney himself offers its own singular contribution and is very worthy of being honored among his peers. William Desmond, Villanova University and Katholieke Universteit Leuven

With an infectious spirit of intellectual generosity, Kearney and his dialogue partners parse critical points of connection and divergence on the question of God and the meaning of religion in our time. For readers coming to this topic for the first time, this book provides a working bibliography for critical works in this tradition of philosophy and theology. For insiders, it adds new layers to longstanding conversations about 'great, inherited texts.' Shelly Rambo, Boston University

A lucid introduction to contemporary Continental philosophy of religion and a guide through the contested terrain between theists, atheists, and those who search for a credible ana-theist option to articulate the sacred in everyday life. Dermot Moran, University College Dublin

A welcome addition... for anyone unfamiliar with the work of Richard Kearney, this could be an excellent first introduction to anatheism and the God-who-may-be. Philosophischer Literaturanzeiger

A profound, timely compendium of contemporary phenomenon of the sacred, seen and discussed with an urgency that is implicitly shown. Prabuddah Bharata

I would recommend this volume both to those familiar with the . . . more continental school of the philosophy or religion, hermeneutical or otherwise, and those looking for an introduction. The ranging conversations offer both insight to the seasoned reader, as well as an excellent bibliography from which to wade into the deep waters of the present state of art. Tijdschrift voor Filosofie

Read an excerpt from Richard Kearney's conversation with Charles Taylor:

Richard Kearney holds the Charles H. Seelig Chair of Philosophy at Boston College. He is the author of more than twenty books, including Strangers, Gods, and Monsters, The God Who May Be, and Anatheism: Returning to God After God.

Jens Zimmermann holds the Canada Research Chair for Interpretation, Religion, and Culture at Trinity Western University. He has published widely on philosophy, theology, and literary theory. He is the author of Humanism and Religion: A Call for the Renewal of Western Culture and Hermeneutics: A Very Short Introduction.