Cinema and the Re-creation of the World, second edition 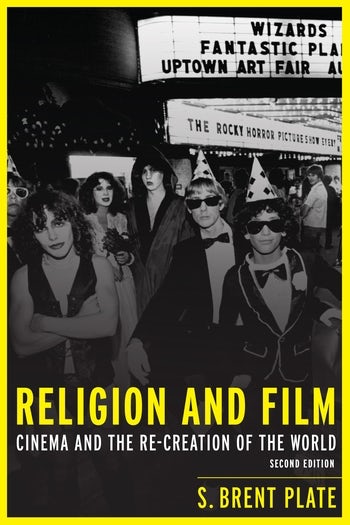 Cinema and the Re-creation of the World, second edition

Religion and cinema share a capacity for world making, ritualizing, mythologizing, and creating sacred time and space. Through cinematography, mise-en-scène, editing, and other production activities, film takes the world “out there” and refashions it. Religion achieves similar ends by setting apart particular objects and periods of time, telling stories, and gathering people together for communal actions and concentrated focus. The result of both cinema and religious practice is a re-created world: a world of fantasy, a world of ideology, a world we long to live in, or a world we wish to avoid at all costs.

Religion and Film introduces readers to both religious studies and film studies by focusing on the formal similarities between cinema and religious practices and on the ways they each re-create the world. Explorations of film show how the cinematic experience relies on similar aesthetic devices on which religious rituals have long relied: sight, sound, the taste of food, the body, and communal experience. Meanwhile, a deeper understanding of the aesthetic nature of religious rituals can alter our understanding of film production. Utilizing terminology and theoretical insights from the study of religion as well as the study of film, Religion and Film shows that by paying attention to the ways films are constructed, we can shed new light on the ways religious myths and rituals are constructed and vice versa.

This thoroughly revised and expanded new edition is designed to appeal to the needs of courses in religion as well as film departments. In addition to two new chapters, this edition has been restructured into three distinct sections that offer students and instructors theories and methods for thinking about cinema in ways that more fully connect film studies with religious studies.

Contributes crucially to film theory as much as religious studies, marking a pivotal moment in the humanities in which religiosity, mythology, media, and narratology are once again being revisited in the continued critique of the Enlightenment, Western society, and secular humanism. Reading Religion

This new standalone version is erudite yet accessible, with a truly inclusive and knowledgeable appreciation of both cinema and religion. Joel Mayward, Journal of Film and Religion

A truly compelling comparative study. The analogues between filmic and religious worldmaking are richly illuminating, bringing the reader to fresh insights about the structure and dynamics of both mediums. Setting aside the customary approach of simply analyzing religious themes in movies, this volume compares mythic and ritual ways of constructing a world with cinematic processes such as framing, focus, editorial selection, lighting, camera angle, voice, use of time and space, and iconicity—doing so with lucidity, ingenuity, and masterful use of a repertoire of interpretive frameworks. William Paden, University of Vermont

Spiritual questions are still anathema to most film theorists. On the other hand, many religious scholars who dabble in cinema have treated it illustratively and shown a blunt insensitivity to the specifics of film form. This book is exemplary in the cogent and creative way it builds a bridge between these two alienated intellectual worlds. Plate’s unfailingly perceptive mise-en-scène analysis discovers the visual mythologizing at work in an eclectic filmography ranging from George Lucas to Dziga Vertov and Stan Brakhage. At the same time, he remains critically aware of politics and ideology, attempting a more inclusive definition of religion that goes beyond the dogmatic and the doctrinal. A wonderfully syncretic study that offers an amazing bricolage of ideas. Peter Matthews, University of the Arts London

List of Illustrations
Preface to the Second Edition
Preface to the First Edition
Acknowledgments
Introduction: Worldmaking On-Screen and at the Altar
Part I. Before the Show: Pulling the Curtain on the Wizard
1. Audio-Visual Mythologizing
2. Ritualizing Film in Space and Time
3. Sacred and Cinematic Spaces: Cities and Pilgrimages
Part II. During the Show: Attractions and Distractions
4. Religious Cinematics: Body, Screen, and Death
5. The Face, the Close-Up, and Ethics
Part III. After the Show: Re-Created Realities
6. The Footprints of Film: Cinematic After-Images in Sacred Time and Space
Notes
References
Filmography
Index

S. Brent Plate is a writer, editor, and visiting associate professor of religious studies at Hamilton College. His books include Representing Religion in World Cinema: Filmmaking, Mythmaking, Culture Making (2003); Blasphemy: Art That Offends (2006); and A History of Religion in 5½ Objects: Bringing the Spiritual to Its Senses (2014). Plate is also cofounder and managing editor of the journal Material Religion: The Journal of Objects, Art, and Belief.