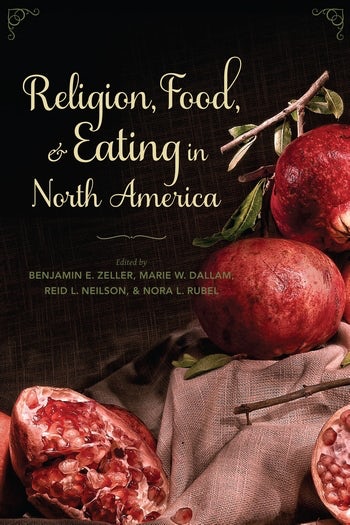 The way in which religious people eat reflects not only their understanding of food and religious practice but also their conception of society and their place within it. This anthology considers theological foodways, identity foodways, negotiated foodways, and activist foodways in the United States, Canada, and the Caribbean. Original essays explore the role of food and eating in defining theologies and belief structures, creating personal and collective identities, establishing and challenging boundaries and borders, and helping to negotiate issues of community, religion, race, and nationality.

Contributors consider food practices and beliefs among Christians, Jews, Muslims, and Buddhists, as well as members of new religious movements, Afro-Caribbean religions, interfaith families, and individuals who consider food itself a religion. They traverse a range of geographic regions, from the Southern Appalachian Mountains to North America's urban centers, and span historical periods from the colonial era to the present. These essays contain a variety of methodological and theoretical perspectives, emphasizing the embeddedness of food and eating practices within specific religions and the embeddedness of religion within society and culture. The volume makes an excellent resource for scholars hoping to add greater depth to their research and for instructors seeking a thematically rich, vivid, and relevant tool for the classroom.

A welcome addition to the literature on food and religion. No other work compares with it. Ken Albala, coeditor of Food and Faith in Christian Culture

Fresh and mature fare that nurtures not only our understanding of foodways but also of American religion and the wider study of religions. Charles Wallace, Willamette University

From a Georgia farm to the salmon runs of the Pacific Northwest, from Sylvester Graham to hip vegans, Americans draw tight links between their food and their faith. These essays investigate a broad set of religious traditions, and the results are theoretically rich yet accessible to nonspecialists. The volume helps us think about what it means to be American, as well as what it means to be religious, and forces us to broaden our definition of religion, with implications for health, commerce, and the environment. Daniel Sack, author of Whitebread Protestants: Food and Religion in American Culture

An excellent introduction to this growing area of inquiry, and one that will undoubtedly serve as a foundation for future scholarship. Food, Culture & Society

Foreword, by Martha L. Finch
Acknowledgments
Introduction: Religion, Food, and Eating, by Marie W. Dallam
Part 1: Theological Foodways
1. Dynamics of Christian Dietary Abstinence, by David Grumett
2. "Join Us! Come, Eat!": Vegetarianism in the Formative Period of the Seventh-day Adventists and the Unity School of Christianity, by Jeremy Rapport
3. "And as We Dine, We Sing and Praise God": Father and Mother Divine's Theologies of Food, by Leonard Norman Primiano
4. Hallelujah Acres: Christian Raw Foods and the Quest for Health, by Annie Blazer
Part 2: Identity Foodways
5. Draydel Salad: The Serious Business of Jewish Food and Fun in the 1950s, by Rachel Gross
6. Salmon as Sacrament: First Salmon Ceremonies in the Pacific Northwest, by Suzanne Crawford O'Brien
7. An Unusual Feast: Gumbo and the Complex Brew of Black Religion, by Derek S. Hicks
8. "I Chose Judaism but Christmas Cookies Chose Me": Food, Identity, and Familial Religious Practice in Christian/Jewish Blended Families, by Samira K. Mehta
Part 3: Negotiated Foodways
9. Crystallizing Subjectivities in the African Diaspora: Sugar, Honey, and the Gods of Afro-Cuban Lucumí, by Elizabeth Pérez
10. Good to Eat: Culinary Priorities in the Nation of Islam and Latter-day Saint Church, by Kate Holbrook
11. Mindful Eating: American Buddhists and Worldly Benefits, by Jeff Wilson
12. The Feast at the End of the Fast: The Evolution of an American Jewish Ritual, by Nora L. Rubel
Part 4: Activist Foodways
13. Koinonia Partners: A Demonstration Plot for Food, Fellowship, and Sustainability, by Todd LeVasseur
14. Refreshing the Concept of Halal Meat: Resistance and Religiosity in Chicago's Taqwa Eco-Food Cooperative, by Sarah E. Robinson
15. Quasi-religious American Foodways: The Cases of Vegetarianism and Locavorism, by Benjamin E. Zeller
Selected Bibliography on Religion and Food
List of Contributors
Index

Benjamin E. Zeller is assistant professor of religion at Lake Forest College. He is the author of Prophets and Protons: New Religious Movements and Science in Late Twentieth-Century America.

Marie W. Dallam is assistant professor of religion and culture at the Joe C. and Carole Kerr McClendon Honors College at the University of Oklahoma. She is the author of Daddy Grace: A Celebrity Preacher and His House of Prayer.

Reid L. Neilson is the managing director of the Church History Department of the Church of Jesus Christ of Latter-Day Saints. He is the author of Exhibiting Mormonism: The Latter-day Saints and the 1893 Chicago World's Fair and Early Mormon Missionary Activities in Japan, 1901–1924.

Nora Lynne Rubel is associate professor of religion at the University of Rochester. She is the author of Doubting the Devout: The Ultra-Orthodox in the Jewish-American Imagination and the forthcoming Recipes for the Melting Pot: The Life of the Settlement Cookbook.