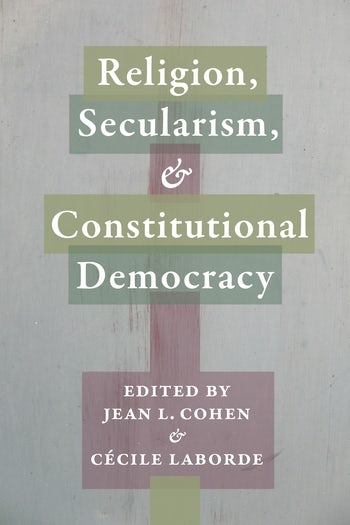 Polarization between political religionists and militant secularists on both sides of the Atlantic is on the rise. Critically engaging with traditional secularism and religious accommodationism, this collection introduces a constitutional secularism that robustly meets contemporary challenges. It identifies which connections between religion and the state are compatible with the liberal, republican, and democratic principles of constitutional democracy and assesses the success of their implementation in the birthplace of political secularism: the United States and Western Europe.

Approaching this issue from philosophical, legal, historical, political, and sociological perspectives, the contributors wage a thorough defense of their project's theoretical and institutional legitimacy. Their work brings fresh insight to debates over the balance of human rights and religious freedom, the proper definition of a nonestablishment norm, and the relationship between sovereignty and legal pluralism. They discuss the genealogy of and tensions involving international legal rights to religious freedom, religious symbols in public spaces, religious arguments in public debates, the jurisdiction of religious authorities in personal law, and the dilemmas of religious accommodation in national constitutions and public policy when it violates international human rights agreements or liberal-democratic principles. If we profoundly rethink the concepts of religion and secularism, these thinkers argue, a principled adjudication of competing claims becomes possible.

Religion, Secularism, and Constitutional Democracy critically confronts the contemporary resurgence of 'political theology' with theoretical and philosophical sophistication while nevertheless exhibiting an admirable commitment to respect and tolerance of religious observance and plurality. It is a must-read for anyone interested in the intersection of religion and politics today. John P. McCormick, University of Chicago

The question of the proper role of religion in a secular state, once thought settled, has reemerged as a major challenge to contemporary democracies. The essays in this superb volume address the many aspects of this question with depth and clarity, connecting normative, historical, and institutional analyses in an exemplary way. Taken together, the contributions do more than represent the state of the art in this field of research; rather, they take it to a new level of refinement. Rainer Forst, Goethe University Frankfurt

This volume is practically a 'who's-who' of the very top scholars writing on religion, secularism, and cultural pluralism. It sits at the cutting edge of debates in all of these fields and will be required reading in seminar rooms across North America and Europe. Andrew F. March, author of Islam and Liberal Citizenship

Introduction, by Jean L. Cohen
Part I: Freedom of Religion or Human Rights
1. Religious Freedom and the Fate of Secularism, by Samuel Moyn
2. Religion: Ally, Threat, or Just Religion?, by Anne Phillips
3. Regulating Religion Beyond Borders: The Case of FGM/C, by Yasmine Ergas
4. Pluralism vs. Pluralism: Islam and Christianity in the European Court of Human Rights, by Christian Joppke
Part II: Non-Establishments and Freedom of Religion
5. Rethinking Political Secularism and the American Model of Constitutional Dualism, by Jean L. Cohen
6. Is European Secularism Secular Enough?, by Rajeev Bhargava
7. State-Religion Connections and Multicultural Citizenship, by Tariq Modood
8. Breaching the Wall of Separation, by Denis Lacorne
9. Transnational Nonestablishment (Redux), by Claudia Haupt
Part III: Religion, Liberalism, and Democracy
10. Liberal Neutrality, Religion, and the Good, by Cécile Laborde
11. Religious Arguments and Public Justification, by Aurelia Bardon
12. Religious Truth and Democratic Freedom: A Critique of the Religious Discourse of Anti-Relativism, by Carlo Invernizzi Accetti
13. Republicanism and Freedom of Religion in France, by Michel Troper
Part IV: Sovereignty and Legal Pluralism in Constitutional Democracies
14. Sovereignty and Religious Norms in the Secular Constitutional State, by Dieter Grimm
15. Religion and Minority Legal Orders, by Maheila Malik
16. The Intersection of Civil and Religious Family Law in the U.S. Constitutional Order: A Mild Legal Pluralism, by Linda C. McClain
17. Religion-Based Legal Pluralism and Human Rights in Europe, by Alicia Cebada Romero
Conclusion: Is Religion Special?
Contributors
Index

Cécile Laborde is a professor of political theory at University College London and a fellow of the British Academy. She is the author of Pluralist Thought and the State in Britain and France and Critical Republicanism: The Hijab Controversy and Political Philosophy.