Retreat from a Rising Sea

Hard Choices in an Age of Climate Change 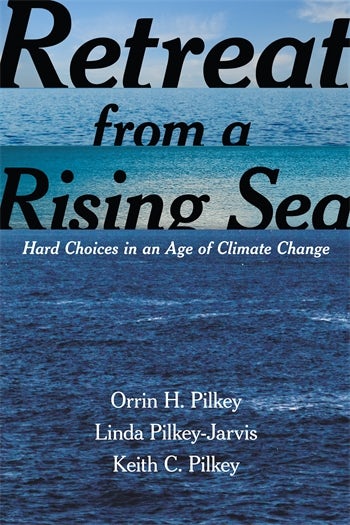 Retreat from a Rising Sea

Hard Choices in an Age of Climate Change

Melting ice sheets and warming oceans are causing the seas to rise. By the end of this century, hundreds of millions of people living at low elevations along coasts will be forced to retreat to higher and safer ground. Because of sea-level rise, major storms will inundate areas farther inland and will lay waste to critical infrastructure, such as water-treatment and energy facilities, creating vast, irreversible pollution by decimating landfills and toxic-waste sites. This big-picture, policy-oriented book explains in gripping terms what rising oceans will do to coastal cities and the drastic actions we must take now to remove vulnerable populations.

The authors detail specific threats faced by Miami, New Orleans, New York, and Amsterdam. Aware of the overwhelming social, political, and economic challenges that would accompany effective action, they consider the burden to the taxpayer and the logistics of moving landmarks and infrastructure, including toxic-waste sites. They also show readers the alternative: thousands of environmental refugees, with no legitimate means to regain what they have lost. The authors conclude with effective approaches for addressing climate-change denialism and powerful arguments for reforming U.S. federal coastal management policies.

Retreat from a Rising Sea is a landmark work long overdue. The book offers deep analysis, case histories, and names villains of denial. It offers visions, solutions, and historic examples of how coastal cities and communities have dealt in the past and will need to cope in the future with rising coastal risks. It is a must-read for coastal residents and policy makers alike. If this book had been written ten years ago, the world would be better off. Klaus Jacob, Lamont-Doherty Earth Observatory, Columbia University Earth Institute

Retreat from a Rising Sea is a book that should be read by everyone concerned about our coasts. In its passion to explain the conclusion that science clearly indicates, it signals the urgency of our retreat from the coast. Carl Hobbs, author of The Beach Book

In Retreat from a Rising Sea, the authors raise tough and crucial questions about living in coastal communities in an era of rising seas and more frequent superstorms. In highlighting the vulnerabilities of many cities and communities in the United States and around the world, they provide a sobering wake-up call for policy makers and planners—and for the billions of people on the front lines of a changing climate. Vicki Arroyo, executive director, Georgetown Climate Center, and professor from practice, Georgetown University Law Center

This accessible, impassioned argument considers the scientific, political, and socioeconomic dimensions of climate change and fervently presses for Americans to come to terms with the disastrous changes to the world's oceans sooner rather than later. Publishers Weekly

Clear and authoritative . . . If only our leaders would read this book. Miami Herald

I recommend the book to young and old who are interested in making a better future by encouraging managed retreat from developed shores. Journal of Coastal Research

The book provides an excellent overview of how fast sea level is rising...well-written, easy to read, and has a message that needs to be clearly heard and acted upon. Weather Underground

Foreword, by the Santa Aguila Foundation
Preface
Acknowledgments
1. Control + Alt + Retreat
2. The Overflowing Ocean
3. The Fate of Two Doomed Cities: Miami and New Orleans
4. New and Old Amsterdam: New York City and the Netherlands
5. Cities on the Brink
6. The Taxpayers and the Beach House
7. Coastal Calamities: How Geology Affects the Fate of the Shoreline
8. Drowning in Place: Infrastructure and Landmarks in the Age of Sea-Level Rise
9. The Cruelest Wave: Climate Refugees
10. Deny, Debate, and Delay
11. Ghosts of the Past, Promise of the Future
Bibliography
Index

Orrin H. Pilkey is James B. Duke Professor Emeritus, Division of Earth and Ocean Sciences, at Duke University. His books include A Celebration of the World's Barrier Islands and Useless Arithmetic: Why Environmental Scientists Can't Predict the Future.

Linda Pilkey-Jarvis is a geologist at the Washington State Department of Ecology, where she helps manage the state's oil-spills program. She is the coauthor, with Orrin H. Pilkey, of Useless Arithmetic: Why Environmental Scientists Can't Predict the Future.

Keith C. Pilkey is an administrative law judge with the Social Security Administration. He has an undergraduate degree from Appalachian State University and a juris doctor from Wake Forest University School of Law. He is coauthor, with Orrin H. Pilkey, of Global Climate Change: A Primer.