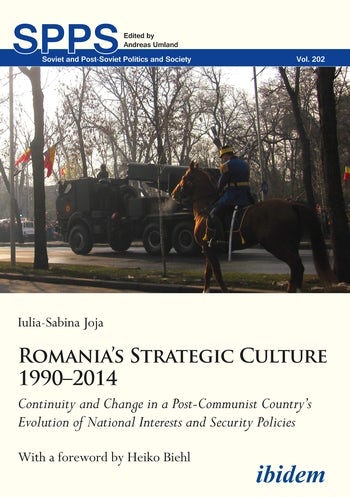 Analysis of strategic culture facilitates a comprehensive understanding of a nation’s security identity and patterns of policy conduct. Though strategic culture changes over time, why and how these mutations take place has not been researched much so far. This book sheds light on the reasons why specific features of a country’s strategic thinking remain rigid while others transform.

The national strategic cultures of postcommunist Eastern Europe have been exposed to a panoply of shocks and shifts. Romania’s communist regime cultivated a uniquely thorny relationship with the Soviet Union, which facilitated the development of a national security narrative legitimizing a highly isolationist foreign policy. These factors have heavily weighed on Romanian post-communist strategic thinking and complicated the transition process. At first glance, Romania went through an astonishing adaptation to novel security challenges. Ultimately, however, its traditional national strategic thinking remained in some ways constant. Core features of Romania’s strategic culture—such as the state-nation constellation—were the most resilient to change. In contrast, the intermediary features—such as the understanding of security and role conception—as well as outer layers—such as the foreign policy orientation and guidelines to using force—of strategic culture were more prone to influence by shocks, shifts, and norm entrepreneurs.

Iulia-Sabina Joja studied political science and international relations in Berlin, Bucharest, and London. She works as a consultant for Euro-Atlantic security and is currently a Hanns Seidel Foundation postdoctoral fellow at the Center for Military History and Social Sciences of the Bundeswehr in Potsdam. Joja also teaches European studies and governance at the Bucharest University of Economic Studies. She previously worked as an advisor for NATO and the Romanian presidential administration.

Heiko Biehl heads the Department of Military Sociology at the Center for Military History and Social Sciences of the Bundeswehr in Potsdam.