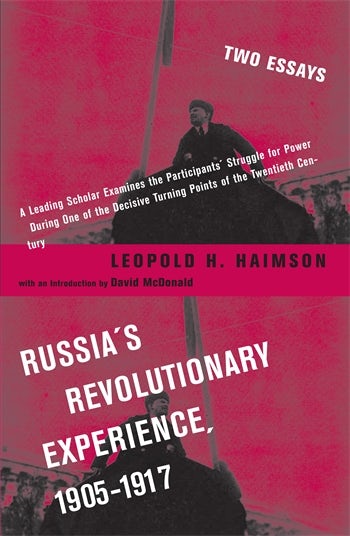 The assertion of a working-class movement, the brutal suppression of a miners' strike, a collapsing Duma, and shrewd political maneuverings all led to the Bolshevik revolution and the fall of Imperial Russia. The eminent historian Leopold Haimson examines these radical shifts in political power and class identity in late Imperial Russia, offering new perspectives on crucial revolutionary figures and the events leading up to the Russian Revolution. The book focuses on two pivotal, interrelated developments: the last massive wave of labor unrest before World War I and the growing differences between two political figures, Lenin, the future head of the Soviet Union, and Iulii Martov, the leader of the democratic opposition to Bolshevism within Russian Social Democracy.

Inspired by the 1912 massacre of two hundred striking miners in the gold fields of Lena, in eastern Siberia, the Russian working class crystallized as a self-aware and politically engaged movement in pursuit of its own rights and dignity. This new sense of class solidarity spread to industrial urban workers, who asserted their demands for better working conditions and became increasingly skeptical of outside groups using them for their own political gain. As Haimson demonstrates, both the Duma (Russia's parliament) and the revolutionary intelligentsia struggled to find an appropriate response to these developments.

Drawing on publications and the private papers of Martov and Lenin, Haimson analyzes the differences between the revolutionaries regarding the realization of political goals and the role of the working class. He demonstrates how ideology and personal proclivities framed their actions as the revolutionary tide mounted. Thus, while Martov believed that the revolution should be allowed to create itself under the democratic guidance and leadership of workers, Lenin saw the state and political power as the key to historical transformation.

An elegant and stimulating book that all concerned with the period will wish to read. Christopher Read, University of Warwick, United Kingdom, Slavic Review

Introduction, by David McDonald
Acknowledgments
Part I: Lenin, Martov, and the Issue of Power
Part II: The Workers' Movement After Lena: The Dynamics of Labor Unrest in the Wake of the Lena Goldfields Massacre (April 1912–July 1914)
Notes
Appendix I. Lenin's April Theses
Appendix II. Summary of Major Findings of Quantitative Analysis of Social Characteristics of Participants in Post-Lena Strike Waves
Note on Sources
Index

Leopold Haimson is professor emeritus in the Department of History at Columbia University. He is the author of The Making of Three Russian Revolutionaries and the classic Russian Marxists and the Origins of Bolshevism, among other works. He lives in New York City.