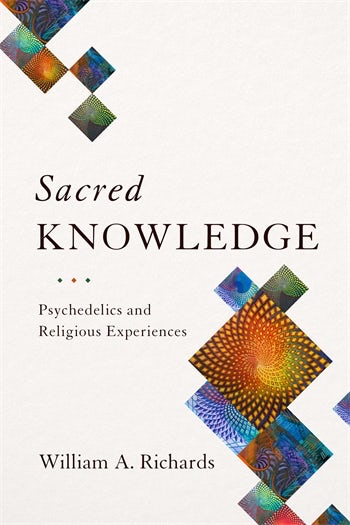 Sacred Knowledge is the first well-documented, sophisticated account of the effect of psychedelics on biological processes, human consciousness, and revelatory religious experiences. Based on nearly three decades of legal research with volunteers, William A. Richards argues that, if used responsibly and legally, psychedelics have the potential to assuage suffering and constructively affect the quality of human life.

Richards's analysis contributes to social and political debates over the responsible integration of psychedelic substances into modern society. His book serves as an invaluable resource for readers who, whether spontaneously or with the facilitation of psychedelics, have encountered meaningful, inspiring, or even disturbing states of consciousness and seek clarity about their experiences. Testing the limits of language and conceptual frameworks, Richards makes the most of experiential phenomena that stretch our understanding of reality, advancing new frontiers in the study of belief, spiritual awakening, psychiatric treatment, and social well-being. His findings enrich humanities and scientific scholarship, expanding work in philosophy, anthropology, theology, and religious studies and bringing depth to research in mental health, psychotherapy, and psychopharmacology.

Richards' Sacred Knowledge is not a tome but rather a concise work rich with personal stories, observations, and insights into a compelling topic long ignored and now garnering the attention it has long deserved. Charles S. Grob, University of California, Los Angeles, School of Medicine

A seminal work that will become required reading for anyone seriously interested in either religious experience or psychedelic research. There has not been a book in this area as valuable since William James's The Varieties of Religious Experience, more than a century ago. James Fadiman, author of The Psychedelic Explorer's Guide: Safe, Therapeutic, and Sacred Journeys

In this wonderfully sensitive, critical, and confessional history one of the foremost clinicians and scholars of presents his own experience with psychedelics and with guiding others in studies to occasion mystical experiences using entheogens. Neither addictive nor toxic, these drugs whatever called surely can under the right set and setting reveal the God within us all. This book is the best accessible overview by someone who knows by experience, and can guide others whether they choose to be involved with entheogens personally or seek to simply to understand others who do. Regardless of choice, this loving man should be your guide. Ralph W. Hood Jr. , University of Tennessee

An inspiring testament to half a century of scientific research and personal exploration into the responsible, beneficial use of psychedelic substances. William A. Richards's work is visionary, personal, and transpersonal, instilled with kindness, deep humanity, and quiet wisdom. Don Lattin, author of The Harvard Psychedelic Club

This is a great book which I highly recommend. It is an immersive experience, which provides an opportunity for those unfamiliar with nonordinary states of consciousness to catch a glimpse of their beauty and power. William A. Richards seamlessly weaves together his extensive understanding of spirituality on the one hand and academic and clinical science on the other – a rare combination. His humour, insights, and empathy shine through on every page. The topic is timely and a manifestation of the fact that the intellectual battle regarding the potential of nonordinary states of consciousness (as, in this case, facilitated by psychedelics) has been won. Amanda Feilding, director, Beckley Foundation

Sacred Knowledge provides the most comprehensive overview of the actual use of psychedelics in psychotherapy and of the transformative power of mystical experiences. Torsten Passie, Hannover Medical School

This is a wonderful book and couldn't have been launched at a more auspicious time. As William A. Richards has portrayed so beautifully, psychedelics provide an experience of total sanity and give a glimpse of a deeper, more heart-centred, and universal spiritual reality. In my opinion everyone should read this book, not just researchers, theologians, and philosophers but also the ordinary person in society. As society becomes more and more degraded, the planet more and more polluted, and the natural world destroyed, the truth of what the great mystic Krishnamurthy said, 'It is no measure of health to be well adjusted to a profoundly sick society,' will become ever more apparent. Increasingly I find more and more people are asking at a deeper level 'why am I here? 'What is this life about? What is it all for'? The sane answer to many of these questions is to be found in this book. Ivor Browne, University College Dublin

A practitioner and professor, Richards writes as a guide into the depths of psychedelic spirituality in an attempt to bring entheogens—substances that 'generate the divine within'—back into the mainstream. Publishers Weekly

Richards is a generous and gregarious writer, who avoids platitudes for a mix of hard evidence, anecdotal stories, and memoir-like ruminations... Timely. Baltimore City Paper

In Sacred Knowledge, Richards . . . distills his years of thinking about psychedelics’ psychotherapeutic and spiritual uses into a book that is readable for educated general readers, intellectually firm enough for scholars, and flavored by his personal experiences. Tom Roberts, Erowid

Part memoir, part manifesto, Sacred Knowledge charts the birth, death, and resurrection of psychedelic research. . . . The conclusion to be drawn from this book is that it’s time—in a safe setting and with careful guidance—that we started taking our miracles in tablet form. Charles Gilmour, Independent

Foreword, by G. William Barnard
Preface: One Discovery of Transcendence
Acknowledgments
Introduction
Note to the Reader
Part I. Setting the Stage
1. The Death and Rebirth of Psychedelic Research
2. Orientation, Definitions, and the Limits of Language
3. Revelation and Doubt
Part II. Mystical and Visionary Forms of Consciousness
4. Intuitive Knowledge
5. Approaches to Unitive Consciousness
6. New Perspectives on Time and Space
7. Visions and Archetypes
Part III. Personal and Interpersonal Dynamics
8. The Interpersonal and the Mystical
9. Experiences of Meaninglessness, Despair, and Somatic Discomfort
10. Religious Conversion and Psychodynamic Experiences
11. Discipline and Integration
12. Reflections on Death
Part IV. Present and Future Applications of Entheogens
13. Psychedelic Frontiers in Medicine
14. Psychedelic Frontiers in Education
15. Psychedelic Frontiers in Religion
16. Maximizing the Probability of Safety and Benefit
Part V. Onward
17. Fears of Awakening
18. Entering Into a New Paradigm
19. Movement Into the Future
Epilogue: A Concise Report of Insights from the Frontier Where Science and Spirituality Are Meeting
Selected Bibliography
A Hopkins Playlist for Psilocybin Studies (2008 Version)
Name Index
Subject Index

William A. Richards is a clinical psychologist at the Johns Hopkins Bayview Medical Center with formal training in theology and comparative religion. Earlier in his career, he pursued psychedelic research at Spring Grove Hospital Center and the Maryland Psychiatric Research Center in Baltimore. His graduate education included studies at Yale University, Brandeis University, Catholic University, the Andover-Newton Theological School, and the University of Göttingen.