The Real-Life Story That Inspired "The Children's Hour"

Lillian Faderman. With a new foreword by Judith Halberstam 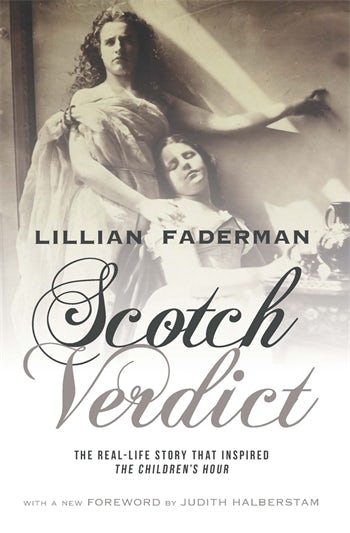 The Real-Life Story That Inspired "The Children's Hour"

Lillian Faderman. With a new foreword by Judith Halberstam

Award-winning author Lillian Faderman recreates the events surrounding this notorious case, which became the basis for Lillian Hellman's famous play, The Children's Hour. Reconstructing the libel suit filed by Pirie and Woods—which resulted in a scotch verdict, or a verdict of inconclusive/not proven—Faderman builds a compelling narrative from court transcripts, judges' notes, witnesses' contradictory testimony, and the prejudices of the men presiding over the case. Her fascinating portrait documents the social, economic, and sexual pressures shaping the lives of nineteenth-century women and the issues of class and gender contributing to their marginalization.

The records are fascinating: they open up for us the worlds of the young female student and the schoolmistress, as well as the workings of the judicial system of early nineteenth-century Scotland. Beyond that, they make us privy to a unique glimpse of what lesbianism was considered to be at the time.... A brilliant find. Karla Jay, Women's Review of Books

Faderman, a noted U.S. feminist, recreates the trial superbly, using the original transcripts and her own detective work. She examines the trial from a feminist viewpoint, showing how it revealed the prevailing attitudes toward women in a phallocentric society. Her approach is valid and compelling, but her story is fascinating on many other levels as well.... Totally engrossing. William French, Globe and Mail

An absorbing transcript detailing the evolution of our understanding of the sexual relationships between women using the Scotch trial as the lynchpin. The story is mesmerizing while the writing is riveting. Aron Row, San Francisco Book Review

Foreword to the 2013 Edition
Nota Bene
Acknowledgments
Part I. The Accusation
Part II. The Trial
Part III. The Review and Appeal
Part IV. The Settlement

Lillian Faderman is professor emerita of English at California State University, Fresno. Her award-winning titles are Odd Girls and Twilight Lovers: A History of Lesbian Life in Twentieth-Century America; Surpassing the Love of Men: Romantic Friendship and Love Between Women from the Renaissance to the Present; Naked in the Promised Land: A Memoir; To Believe in Women: What Lesbians Have Done for America—A History; and Gay L. A.: A History of Sexual Outlaws, Power Politics, and Lipstick Lesbians.