The United States in the Middle East 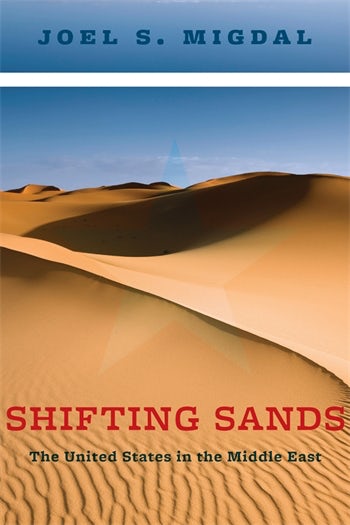 The United States in the Middle East

Joel S. Migdal revisits the approach U.S. officials have adopted toward the Middle East since World War II, which paid scant attention to tectonic shifts in the region. After the war, the United States did not restrict its strategic model to the Middle East. Beginning with Harry S. Truman, American presidents applied a uniform strategy rooted in the country's Cold War experience in Europe to regions across the globe, designed to project America into nearly every corner of the world while limiting costs and overreach.

The approach was simple: find a local power that could play Great Britain's role in Europe after the war, sharing the burden of exercising power, and establish a security alliance along the lines of NATO. Yet regional changes following the creation of Israel, the Free Officers Coup in Egypt, the rise of Arab nationalism from 1948 to 1952, and, later, the Iranian Revolution and the Egypt-Israel peace treaty in 1979 complicated this project. Migdal shows how insufficient attention to these key transformations led to a series of missteps and misconceptions in the twentieth century. With the Arab uprisings of 2009 through 2011 prompting another major shift, Migdal sees an opportunity for the United States to deploy a new, more workable strategy, and he concludes with a plan for gaining a stable foothold in the region.

Shifting Sands is a compelling narrative of American policy in the Middle East since World War II. Joel S. Migdal dissects America's static strategic model in a region that has undergone four periods of profound change. He pushes back against those who would yield to the temptation of writing the Middle East off as beset by endemic instability. Rather, eschewing visions of grand change, Migdal suggests the temperate yet more effective approach of building alliances and fostering gradual change. This is a book to be read by policy makers and students of the Middle East alike. Daniel Kurtzer, Princeton University, former U.S. ambassador to Egypt and Israel

Shifting Sands remains a powerful and vibrant account of the US foreign policy in the Middle East, with an authoritative analysis of the past, present (and future) socio-political dynamics of the region. European Review of International Studies

Preface
Part I. Introduction
1. The Middle East in the Eye of the Global Storm
2. America's Place in the Middle East
Part II. The Cold War and Its Aftermath
3. Failed Partnerships and Fragile Partners
4. Finding a Place in the Middle East: A New Partnership Develops out of Black September
5. The Strategic Partnership Faces Strains: The Yom Kippur War and the Changing Calculus of U.S. Foreign Policy
6. The Strategic Relationship Unravels: The End of the Cold War and the Gulf War of 1990–1991
Part III. A Transformed Region: The Rise and Fall of the Arab Middle East
7. A Changing Lineup of Regional Powerhouses
8. New Boys on the Block: Nonstate Actors
9. A Changing Islam and the Rise of the Islamic Republic of Iran
Part IV. The United States and the New Middle East in the Twenty-First Century
10. The Bush Administration and the Arc of Instability
11. Obama: Engaging the Middle East on Multiple Fronts
Part V. Conclusion: Looking Back and Looking Forward
12. Ups and Downs of an Everyday Player
13. Toward a New Strategic Partnership?
Afterword
Notes
Works Cited
Index

Read the introduction, "The Middle East in the Eye of the Global Storm":

Joel S. Migdal is the Robert F. Philip Professor of International Studies at the Henry M. Jackson School of International Studies, University of Washington, and has been writing about the Middle East and state-society relations worldwide for more than forty years. Among his books are The Palestinian People (with Baruch Kimmerling), Through the Lens of Israel, Strong Societies and Weak States, and State-in-Society.