So Lovely a Country Will Never Perish 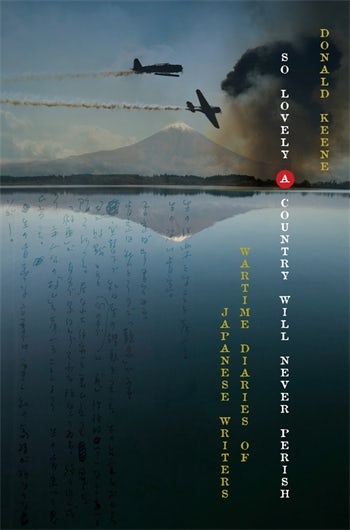 So Lovely a Country Will Never Perish

The attack on Pearl Harbor, which precipitated the Greater East Asia War and its initial triumphs, aroused pride and a host of other emotions among the Japanese people. Yet the single year in which Japanese forces occupied territory from Alaska to Indonesia was followed by three years of terrible defeat. Nevertheless, until the shattering end of the war, many Japanese continued to believe in the invincibility of their country. But in the diaries of well-known writers including Nagai Kafu, Takami Jun, Yamada Futaru, and Hirabayashi Taikoand the scholar Watanabe Kazuo, varying doubts were vividly, though privately, expressed.

Donald Keene, renowned scholar of Japan, selects from these diaries, some written by authors he knew well. Their revelations were sometimes poignant, sometimes shocking to Keene. Ito Sei's fervent patriotism and even claims of racial superiority stand in stark contrast to the soft-spoken, kindly man Keene knew. Weaving archival materials with personal recollections and the intimate accounts themselves, Keene reproduces the passions aroused during the war and the sharply contrasting reactions in the year following Japan's surrender. Whether detailed or fragmentary, these entries communicate the reality of false victory and all-too-real defeat.

Keene shows the complicated and varied reactions to the war. Lorien Kaye, The Age

Keene has scoured the wartime diaries of numerous Japanese writers and judiciously woven excerpts into an elegant narrative that provides some acute insights into the mentality of the Japanese during the years of their greatest crisis. Anthony Head, Times Literary Supplement

Introduction: Wartime Diaries
1. The Day the War Began
2. The Birth of "Greater East Asia"
3. False Victories and Real Defeats
4. A Dismal New Year
5. On the Eve
6. The Jade Voice
7. The Days After
8. The Revival of Literature
9. Rejection of the War
10. Under the Occupation
Notes
Bibliography
Index

"So lovely a country will never perish!... Just supposing, one chance in a million, it actually perishes, I will still rejoice that I had the privilege of being born in this country, rather than any other country in the world, in this, of all periods of mankind.... The Japanese people in recent times have known only victory. The Japanese, for the first time, have been taught what it means to be completely defeated.... Sometimes one loses; sometimes one wins. A people that has not experienced both victory and defeat is still immature. Let us consider that we have at last come of age."&mdashTokugawa Musei

Donald Keene is Shincho Professor of Japanese Literature and University Professor Emeritus at Columbia University. He is the author of more than thirty books, including Chronicles of My Life: An American in the Heart of Japan; Frog in the Well: Portraits of Japan by Watanabe Kazan, 1793-1841; and Emperor of Japan: Meiji and His World, as well as a definitive multivolume history of Japanese literature.