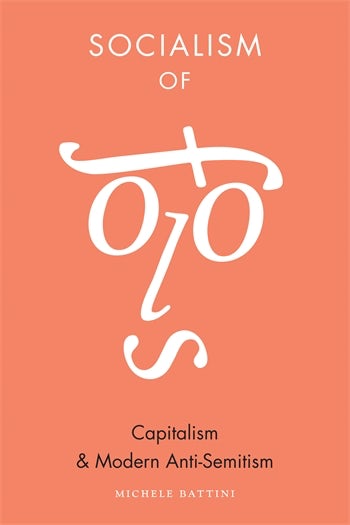 In Socialism of Fools, Michele Battini focuses on the critical moment during the Enlightenment in which anti-Jewish stereotypes morphed into a sophisticated, modern social anti-Semitism. He recovers the potent anti-Jewish, anticapitalist propaganda that cemented the idea of a Jewish conspiracy in the European mind and connects it to the atrocities that characterized the Jewish experience in the nineteenth and twentieth centuries.

Beginning in the eighteenth century, counter-Enlightenment intellectuals and intransigent Catholic writers singled out Jews for conspiring to exploit self-sustaining markets and the liberal state. These ideas spread among socialist and labor movements in the nineteenth century and intensified during the Long Depression of the 1870s. Anti-Jewish anticapitalism then migrated to the Habsburg Empire with the Christian Social Party; to Germany with the Anti-Semitic Leagues; to France with the nationalist movements; and to Italy, where Revolutionary Syndicalists made anti-Jewish anticapitalism the basis of an alliance with the nationalists.

Exemplified best in the Protocols of the Elders of Zion, the infamous document that "leaked" Jewish plans to conquer the world, the Jewish-conspiracy myth inverts reality and creates a perverse relationship to historical and judicial truth. Isolating the intellectual roots of this phenomenon and its contemporary resonances, Battini shows us why, so many decades after the Holocaust, Jewish people continue to be a powerful political target.

A lucid, passionate book on a deeply disturbing subject and a thoughtful analysis of left-wing anti-Semitism throughout the nineteenth and twentieth centuries. Michele Battini's nuanced historical approach is a welcome antidote to a deeply rooted perception of anti-Semitism and anti-Judaism (different but undoubtedly related phenomena) as transhistorical entities. Carlo Ginzburg, University of California, Los Angeles

Offering learned readings of a wide array of sources in the aftermath of Jewish emancipation, Socialism of Fools persuasively situates the era's anti-Semitic ideas and movements within the larger context of Europe's economic, social, and political transformations and offers a provocative coda about current conundrums. Ira I. Katznelson, author of Desolation and Enlightenment: Political Knowledge After Total War, Totalitarianism, and the Holocaust (Columbia University Press).

This is an extraordinarily interesting and original book that will appeal to historians, political theorists, and scholars of cultural studies, religion, and Jewish studies. Battini engages with the vast primary and secondary literature with such mastery that he leaves the reader feeling well and truly informed. Nadia Urbinati, Columbia University

Socialism of Fools is an erudite and important book on the nature of modern anti-Semitism as seen through the words, thoughts, and ideas of anti-Semites. Thoughtful, insightful, enlightened, and based on intense scholarship, Battini's voice is much needed in the context of current debates on the history of anti-Semitism. Robert Fine, University of Warwick

This academic work by Michele Battini demands the full attention of the reader. Every sentence counts and the reader is rewarded by astute insights and detailed explanations. It is an important and highly interesting book. Fathom Journal

[Battini's] genealogical exploration of anti-Jewish anticapitalism political discourse marks an important contribution to the scholarly literature on both antisemitism and capitalism. H-Nationalism

Acknowledgments
Introduction
1. "Is the Palestine Capitalist Here?"
2. European "National Socialism" and Its Propaganda
3. The Dark Core of Italian Civilization: Fascism and the Path of Paolo Orano
4. An Interpretation of Anti-Jewish Anticapitalism
5. The Shoah, Social Anti-Semitism, and Its Aftermath
Notes
Index