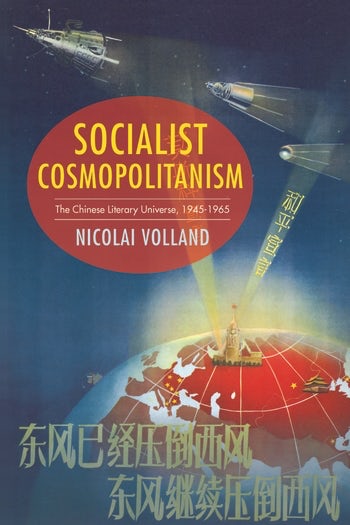 Socialist Cosmopolitanism offers an innovative interpretation of literary works from the Mao era that reads Chinese socialist literature as world literature. As Nicolai Volland demonstrates, after 1949 China engaged with the world beyond its borders in a variety of ways and on many levels—politically, economically, and culturally. Far from rejecting the worldliness of earlier eras, the young People's Republic developed its own cosmopolitanism. Rather than a radical break with the past, Chinese socialist literature should be seen as an integral and important chapter in China's long search to find a place within world literature. Socialist Cosmopolitanism revisits a range of genres, from poetry and land reform novels to science fiction and children's literature, and shows how Chinese writers and readers alike saw their own literary production as part of a much larger literary universe. This literary space, reaching from Beijing to Berlin, from Prague to Pyongyang, from Warsaw to Moscow to Hanoi, allowed authors and texts to travel, reinventing the meaning of world literature. Chinese socialist literature was not driven solely by politics but by an ambitious—but ultimately doomed—attempt to redraw the literary world map.

Nicolai Volland has tackled one of the most provocative issues in modern Chinese and world literature. Chinese socialist literature from the 1940s to the eve of the Great Cultural Revolution has for decades been interpreted solely in terms of propaganda. Volland argues for a more comprehensive understanding of its conception, production, circulation, and reception. Through the prism of socialist cosmopolitanism, Volland offers a new look at issues from translation to transculturation, from the technology of media to the politics of world literature. David Der-wei Wang, Harvard University

This book should be required reading for anyone interested in the development of global literary systems in the twentieth and twenty-first centuries. Volland skillfully sketches the structure of a socialist literary world-system from the Chinese perspective, revealing exciting possibilities for world literature studies. As noteworthy for its sensitive readings of its texts as for its theoretical argument, Volland's book breaks important new ground. Alexander Beecroft, University of South Carolina

Socialist Cosmopolitanism forcefully intervenes in the study of modernity, crosscultural circulation, and Communist cultural institutions. The book contributes new paradigms to the study of modern China, world literature, and literary history and criticism. Volland argues that the Maoist "red classics" should be understood as part of the trajectory of literary development in China and abroad. Moreover, he shows that the Cold War ideological polarization was accompanied by a strong cosmopolitan impulse, one that has shaped literary works and the concept of literature itself. Yomi Braester, University of Washington

Theoretically informed, closely argued, and elegantly written. . . . Socialist Cosmopolitanism is a must-read for anyone interested in Chinese socialist culture and will undoubtedly further animate studies on cosmopolitanisms, transculturation, and world literature among scholars from across disciplines. Tie Xiao, Modern Chinese Literature and Culture

Nicolai Volland in Socialist Cosmopolitanism has taken on [a] herculean task, and he has succeeded with nuance and grace. Lisa Rofel, The China Journal

Within the growing body of scholarship reassessing the early years of the PRC in the bottom-up perspective of everyday history, Nicolai Volland’s study of the post-1949 literary system represents a valuable contribution. It provides new answers to questions about what ordinary people were commonly reading, how Chinese literature fitted into the new international cultural system centred on Moscow, and how Chinese writers were encouraged to contribute to building the new state. . . . Both historians and literature scholars will therefore find Volland’s study of great value in providing a richer, more nuanced picture of cultural production in the early PRC. Sebastian Veg, China Quarterly

[Socialist Cosmopolitanism] makes an important contribution to our understanding of both modern Chinese literature and global socialist culture, and is written in an extremely accessible voice that makes it a genuine pleasure to read. Krista Van Fleit, China Perspectives

This book is a valuable addition to Western studies of the culture of the early years of the People’s Republic. . . . Volland’s contribution demonstrates the international dimension of Chinese culture, in particular the profound influence of the Soviet Union, in this pivotal period. Richard King, Modern Language Quarterly

Socialist Cosmopolitanism enriches our understanding of the much discussed notion of 'world literature' by situating Chinese socialist literature as part of a transnational and pansocialist literary front. Gal Gvili, Comparative Literature Studies

Nicolai Volland is assistant professor of Chinese and comparative literature at the Pennsylvania State University.