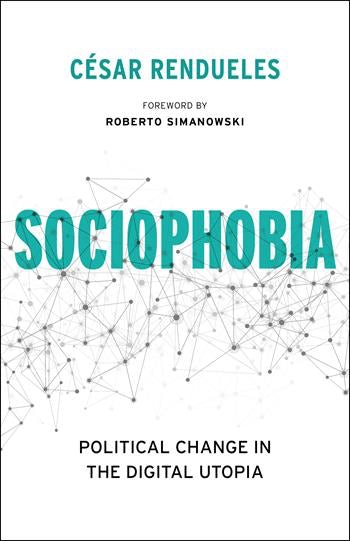 The great ideological cliché of our time, César Rendueles argues in Sociophobia, is the idea that communication technologies can support positive social dynamics and improve economic and political conditions. We would like to believe that the Internet has given us the tools to overcome modernity's practical dilemmas and bring us into closer relation, but recent events show how technology has in fact driven us farther apart.

Named one of the ten best books of the year by Babelia El País, Sociophobia looks at the root causes of neoliberal utopia's modern collapse. It begins by questioning the cyber-fetishist dogma that lulls us into thinking our passive relationship with technology plays a positive role in resolving longstanding differences. Rendueles claims that the World Wide Web has produced a diminished rather than augmented social reality. In other words, it has lowered our expectations with respect to political interventions and personal relations. In an effort to correct this trend, Rendueles embarks on an ambitious reassessment of our antagonistic political traditions to prove that post-capitalism is not only a feasible, intimate, and friendly system to strive for but also essential for moving past consumerism and political malaise.

The enthralling Sociophobia urges us to critically rethink certain fundamental terms of our times, such as cooperation, compromise, community, and participation, and it reminds us of the extent to which we are only partially rational beings—fragile, and wholly codependent. Lucía del Moral Espín, Revista Redes

Rendueles's book transcends the national context in which it was written, and, without exaggeration, goes to the heart of the contemporary problem of political organization, as it concerns radical protest and resistance movements. The refreshing aspect of Sociophobia is its sober approach to the role of new media in fomenting alternative political structures. Michael Marder, IKERBASQUE Research Professor of Philosophy at the University of the Basque Country and professor at large in the Humanities Institute at the University of Diego Portales

Sociophobia is already a landmark book in the Spanish-language world. With his contrarian perspective on the emancipatory capability of social networks, copyleft, and other forms of activism in the digital era, Rendueles will have a major impact on global debates about technology and postcapitalism. Ignacio Sánchez Prado, Washington University in St. Louis

César Rendueles is a professor of sociology at the Complutense University of Madrid.