How We Recover, Identify, Bury, and Honor Our Military Fallen 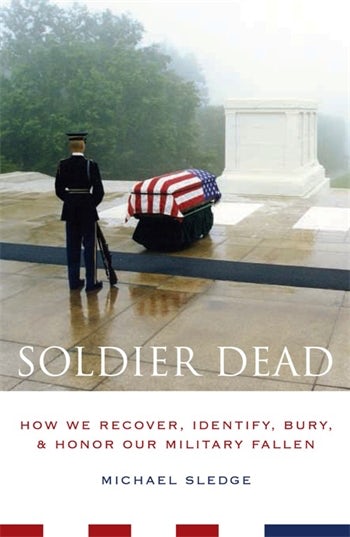 How We Recover, Identify, Bury, and Honor Our Military Fallen

What happens to members of the United States Armed Forces after they die? Why do soldiers endanger their lives to recover the remains of their comrades? Why does the military spend enormous resources and risk further fatalities to recover the bodies of the fallen, even decades after the cessation of hostilities? Soldier Dead is the first book to fully address the complicated physical, social, religious, economic, and political issues concerning the remains of men and women who die while serving their country. In doing so, Michael Sledge reveals the meanings of the war dead for families, soldiers, and the nation as a whole.

Why does recovering the remains of servicepeople matter? Soldier Dead examines this question and provides a thorough analysis of the processes of recovery, identification, return, burial, and remembrance of the dead. Sledge traces the ways in which the handling of our Soldier Dead has evolved over time and how these changes have reflected not only advances in technology and capabilities but also the shifting attitudes of the public, government, and military. He also considers the emotional stress experienced by those who handle the dead; the continuing efforts to retrieve bodies from Korea and elsewhere; and how unresolved issues regarding the treatment of enemy dead continue to affect U.S. foreign relations.

Skillfully incorporating excerpts from interviews, personal correspondence and diaries, military records, and journalistic accounts-as well as never-before-published photographs and his own reflections-Michael Sledge presents a clear, concise, and compassionate story about what the dead mean to the living. Throughout Soldier Dead, the voices of the fallen are heard, as are those of family members and military personnel responsible for the dead before final disposition. At times disturbing and at other times encouraging, they are always powerful as they speak of danger, duty, courage, commitment, and care.

Soldier Dead is a timely and detailed investigation into the moral conscience of American society which will be of interest to anyone concerned with the human costs of war. An important and passionate book which deserves a wide readership. Chris Shilling, University of Portsmouth, UK, author of The Body in Culture, Technology and Society

It is well-researched and respectful in its exhaustive examination of the history of the treatment of U.S. and enemy war dead. Clay Evans, Boulder Daily Camera

Sledge...has penned a meticulously researched and detailed book that takes a hard--but pensive--look at the traditions and practice of how the U.S. military treats its dead. John Andrew Prime, The Times (Shreveport)

Soldier Dead is not an easy or pleasant book, but it is an important and compelling one. Jules Wagman, St. Louis Post-Dispatch

Michael Sledge...homes in on the U.S. military's treatment of its fallen in his groundbreaking Soldier Dead. John Prados, Washington Post Book Review

This splendid book... fills the gap in the literature of war, and does so in an informative and sensitive way. Lawrence D. Freedman, Foreign Affairs

An engaging but sobering account... a fine work that... should be widely read by military historians. Timothy K. Nenninger, Journal of Military History

Soldier Dead is a valuable addition to the body of literature on American military history. Matther J. Seelinger, On Point: Journal of Army History

Edifying and powerful... This timely, yet enduring book deserves a place in the annals of American history. Amy O'Loughlin, Mothertown Monthly

Sledge reminds us that the cost of war in lives must be continually evaluated. James E. McCarroll, Armed Forces & Society

Introduction
1. Why It Matters
2. Combat Recoveries
3. Noncombat Recoveries
4. Identification
5. The Return of the Dead
6. Burial
7. All Bodies Are Not the Same
8. Open Wounds
Conclusion