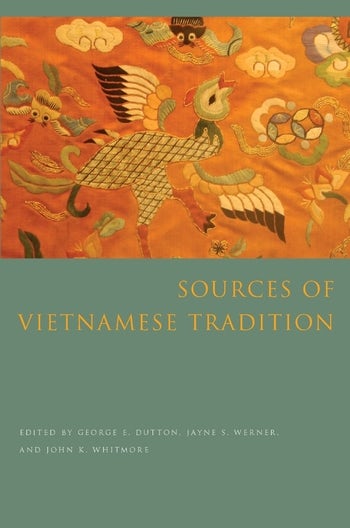 Sources of Vietnamese Tradition provides an essential guide to two thousand years of Vietnamese history and a comprehensive overview of the society and state of Vietnam. Strategic selections illuminate key figures, issues, and events while building a thematic portrait of the country's developing territory, politics, culture, and relations with neighbors. The volume showcases Vietnam's remarkable independence in the face of Chinese and other external pressures and respects the complexity of the Vietnamese experience both past and present.

The anthology begins with selections that cover more than a millennium of Chinese dominance over Vietnam (111 B.C.E.–939 C.E.) and follows with texts that illuminate four centuries of independence ensured by the Ly, Tran, and Ho dynasties (1009–1407). The earlier cultivation of Buddhism and Southeast Asian political practices by the monarchy gave way to two centuries of Confucian influence and bureaucratic governance (1407–1600), based on Chinese models, and three centuries of political competition between the north and the south, resolving in the latter's favor (1600–1885). Concluding with the colonial era and the modern age, the volume recounts the ravages of war and the creation of a united, independent Vietnam in 1975. Each chapter features readings that reveal the views, customs, outside influences on, and religious and philosophical beliefs of a rapidly changing people and culture. Descriptions of land, society, economy, and governance underscore the role of the past in the formation of contemporary Vietnam and its relationships with neighboring countries and the West.

[Sources of Vietnamese Tradition] will be indispensable for students interested in Vietnamese society and political theory.... Essential. Choice

This addition to the venerable Introduction to Asian Civilizations series marks a major step in the maturation of Vietnam Studies in the American academy. Foreign Affairs

This is an excellent volume that fills a long-standing need for English-language translations of primary documents that cover the chronological breadth and diverse concerns of the Vietnamese past. Journal of Asian Studies

The anthology furnishes a good sense of the structure of 'Vietnamese' history and is sure to function both as a formidable work of reference and a sound base for further exploration of the subject. A.V.M. Horton, Journal of the Royal Asiatic Society

George E. Dutton is associate professor of Southeast Asian languages and cultures and vice chair of the Department of Asian Languages and Cultures at the University of California, Los Angeles. His research focuses on social movements, historiographical issues, and colonial culture and education, and he is the author of The Tay So'n Uprising: Society and Rebellion in Eighteenth-Century Vietnam.

Jayne S. Werner is associate research scholar in the Weatherhead East Asian Institute at Columbia University and professor emerita of political science at Long Island University. Her most recent book is Gender, Household, and State in Post-Revolutionary Vietnam.