Homosexuality and Community in the Early Nazi Movement 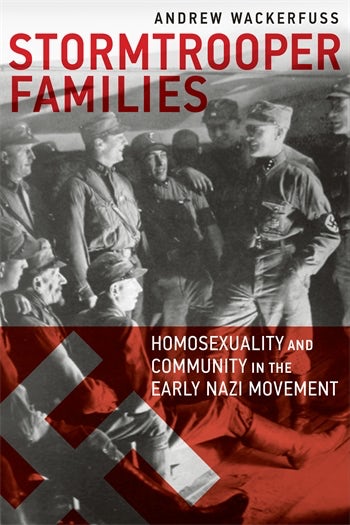 Homosexuality and Community in the Early Nazi Movement

Based on extensive archival work, Stormtrooper Families combines stormtrooper personnel records, Nazi Party autobiographies, published and unpublished memoirs, personal letters, court records, and police-surveillance records to paint a picture of the stormtrooper movement as an organic product of its local community, its web of interpersonal relationships, and its intensely emotional internal struggles. Extensive analysis of Nazi-era media across the political spectrum shows how the public debate over homosexuality proved just as important to political outcomes as did the actual presence of homosexuals in fascist and antifascist politics.

As children in the late-imperial period, the stormtroopers witnessed the first German debates over homosexuality and political life. As young adults, they verbally and physically battled over these definitions, bringing conflicts over homosexuality and masculinity into the center of Weimar Germany's most important political debates. Stormtrooper Families chronicles the stormtroopers' personal, political, and sexual struggles to explain not only how individual gay men existed within the Nazi movement but also how the public meaning of homosexuality affected fascist and antifascist politics—a public controversy still alive today.

A fascinating picture of the private lives of the SA, both as individuals and in their close-knit groups. Many studies concentrate on the SA leadership and its trials and tribulations, but Wackerfuss shines a light on individual units, which were by no means a united front but sometimes fraught with infighting. Beyond that, he peers into the life and minds of individual SA men to see what motivated them to join this violent organization and how it became instrumental in winning support for Adolf Hitler. Geoffrey Giles, University of Florida

Stormtrooper Families is a much needed addition to the vast collection of books on the Third Reich and its history. Books by Meri

It is a rare achievement indeed to tell us something new about Nazism. Through its in-depth exploration of 'everyday' life within Hamburg's Sturmabteiling (SA), the Nazi Party's paramilitary group, Andrew Wackerfuss' rich and readable book does just that. Victoria Harris, Times Higher Education

A fascinating study of a history that many textbooks have ignored. Darrell Scheidegger Jr., Outword

A fascinating, well-researched and well-written book, this one is a keeper. Angel Curtis, OutSmart

A very readable history of the Sturmabteilung (SA), or stormtroopers, one of the earliest wings of Nazism.... Highly recommended. Choice

Wackerfuss brings a very perceptive eye to his subject.... Academic readers will find his contribution to our knowledge of the SA, and especially his perceptive analysis of the psychology of some of its members, immensely useful, while more casual readers will surely find his account, quite simply, very enjoyable to read. Alex Burkhardt, H-German

Wackerfuss provides a welcome addition to our understanding of the early SA movement, and a thoughtful commentary on postwar notions of Nazi sexuality and homoeroticism. Tiia Sahrakorpi, German History

Stormtrooper Families reveals intimate details about the lives of the men who served in the famously cliquish, violent, and chaotic German military unit known as Sturmabteilung (a.k.a. "SA" or "Stormtroopers"). Jacob Anderson-Minshall, The Advocate

A very readable book that offers a window on daily life in the SA as well as a provocative argument about homosexuality and Nazism. Laurie Marhoefer, American Historical Review

Andrew Wackerfuss is a historian with the United States Air Force and an adjunct professor at Georgetown University, Washington, D.C.