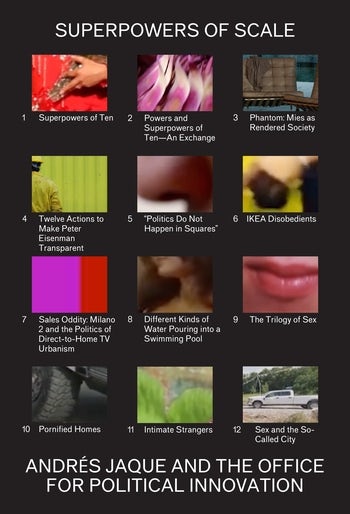 The objects of architecture are not simply inert assemblies of material—they are complex entities that unfold their potential agencies (whether political, social, or environmental) in equally complex ways. Exploring these forms of architectural agency has in recent years been a central aspect of the work of Andrés Jaque and the Office for Political Innovation, who, in addition to their built works, pursue a research practice through the many other media of architectural production. Their projects are reactive, intervening on what already exists to demonstrate how design, politics, and criticality operate across different scales and at the intersection of multiple realities. Jaque’s performances, videos, and installations—and this book, which collects a range of recent research projects—bring new subjects into the fold of architecture, focusing on alternative actors, distributions of power and representation, and the sociocultural effects of architecture. These episodes address ideas like genetic manipulation, the necessary requeering of dequeered spaces of online interaction, and the selling of modern architectural comforts in order to subvert the field from within and to contest capitalism's flattening-out of public life.

Andrés Jaque is the founder of the Office for Political Innovation, an architectural agency working in the intersection of design, research, and activism. The office’s work explores architecture as a political practice that negotiates its agency through trans-scalar expression. The Office for Political Innovation has been awarded the 2016 Frederick Kiesler Prize from the City of Vienna, the SILVER LION at the fourteenth Venice Biennale, and the Dionisio Hernández Gil Award, among others.

Andrés Jaque is also the director of the Advanced Architectural Design Program at Columbia University Graduate School of Architecture, Planning, and Preservation. His research has been published in Perspecta, Log, Thresholds, and Volume, among other publications.