Why We Doubt What Women Say About Their Lives 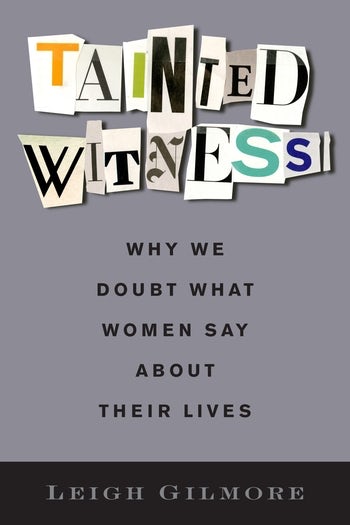 Why We Doubt What Women Say About Their Lives

In 1991, Anita Hill's testimony during Clarence Thomas's Senate confirmation hearing brought the problem of sexual harassment to a public audience. Although widely believed by women, Hill was defamed by conservatives and Thomas was confirmed to the Supreme Court. The tainting of Hill and her testimony is part of a larger social history in which women find themselves caught up in a system that refuses to believe what they say. Hill's experience shows how a tainted witness is not who someone is, but what someone can become.

Why are women so often considered unreliable witnesses to their own experiences? How are women discredited in legal courts and in courts of public opinion? Why is women's testimony so often mired in controversies fueled by histories of slavery and colonialism? How do new feminist witnesses enter testimonial networks and disrupt doubt? Tainted Witness examines how gender, race, and doubt stick to women witnesses as their testimony circulates in search of an adequate witness. Judgment falls unequally upon women who bear witness, as well-known conflicts about testimonial authority in the late twentieth and early twenty-first centuries reveal. Women's testimonial accounts demonstrate both the symbolic potency of women's bodies and speech in the public sphere and the relative lack of institutional security and control to which they can lay claim. Each testimonial act follows in the wake of a long and invidious association of race and gender with lying that can be found to this day within legal courts and everyday practices of judgment, defining these locations as willfully unknowing and hostile to complex accounts of harm. Bringing together feminist, literary, and legal frameworks, Leigh Gilmore provides provocative readings of what happens when women's testimony is discredited. She demonstrates how testimony crosses jurisdictions, publics, and the unsteady line between truth and fiction in search of justice.

Tainted Witness is an important, relevant, often brilliant book. It further establishes Leigh Gilmore as one of the best critics writing today on the intersection of feminism and life narrative.

Tainted Witness displays, once more, Leigh Gilmore's remarkable ability to hone in on the most interesting, provocative, or instructive moments in any historical situation or text, and then say memorable and highly useful things about them.

Rarely does an academic book address its moment so precisely as Tainted Witness.... An important and timely book. If ever we needed evidence that the work of feminism is not yet done, this is it. Times Higher Education

Tainted Witness doesn't just look at what's broken about how we view women's testimony. It also examines how women can work toward "distributing doubt" and ultimately arrive at true justice, making this essential reading for women living under a president who publicly professed sexual assault and faced no consequences. Rumpus

Tainted Witness is a timely and necessary defense of the women whose voices are so often drowned out or shouted down. Washington Post

An important work. Resources for Gender and Women Studies

Leigh Gilmore, Distinguished Visiting Professor of Women's and Gender Studies at Wellesley College, is the author of The Limits of Autobiography: Trauma and Testimony (2001) and Autobiographics: A Feminist Theory of Women's Self-Representation (1994) and coeditor of Autobiography and Postmodernism (1994). She has published articles in Feminist Studies, Signs, Women's Studies Quarterly, and Biography, among others, and in numerous collections. She was Dorothy Cruickshank Backstrand Chair of Gender and Women's Studies at Scripps College, professor of English at the Ohio State University, and has held visiting appointments at Brown University, Harvard Divinity School, Northeastern University, the University of California, Santa Cruz, and the University of California, Berkeley.