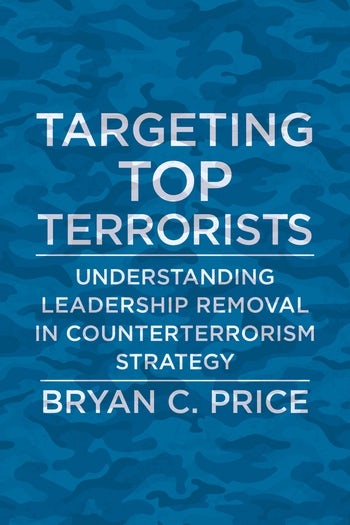 When President Barack Obama announced the assassination of Osama bin Laden, many Americans hoped the killing of al-Qaida’s leader would sound the death knell for the organization. Since 9/11, killing and capturing terrorist leaders has been a central element in U.S. counterterrorism strategy. This practice, known as leadership decapitation, is based on the logic that removing key figures will disrupt the organization and contribute to its ultimate failure. Yet many scholars have argued that targeted killings are ineffective or counterproductive, questioning whether taking out a terror network’s leaders causes more problems than it solves.

In Targeting Top Terrorists, Bryan C. Price offers a rich, data-driven examination of leadership decapitation tactics, providing theoretical and empirical explanations of the conditions under which they can be successful. Analyzing hundreds of cases of leadership turnover from over two hundred terrorist groups, Price demonstrates that although the tactic may result in short-term negative side effects, the loss of top leaders significantly reduces terror groups’ life spans. He explains vital questions such as: What factors make some terrorist groups more vulnerable than others? Is it better to kill or capture terrorist leaders? How does leadership decapitation compare to other counterterrorism options? With compelling evidence based on an original dataset along with an in-depth case study of Hamas, Targeting Top Terrorists contributes to scholarship on terrorism and organizational theory and provides insights for policy makers and practitioners on some of the most pressing debates in the field.

From one of the country's leading experts on terrorism, Targeting Top Terrorists breaks important new ground in our understanding of terrorist groups, the importance of their leaders, and the implications of removing those leaders from the battlefield. It is rare that a book speaks to academics, policy makers, and war fighters, but Price's book does just that. Michael Morell, former acting director and deputy director of the Central Intelligence Agency and host of the Intelligence Matters podcast

Targeting Top Terrorists analyzes the impact of leadership decapitation from both empirical and quantitative perspectives, and Price’s research presents new findings that make a significant and original contribution to the current literature. This book is a must-read for both scholars and policy makers. Boaz Ganor, dean of the Lauder School of Government, Diplomacy, and Strategy, Interdisciplinary Center, Herzliya

Is leadership decapitation an effective tool in contending with the persistent threat posed by terrorist groups? In Targeting Top Terrorists, Bryan Price tackles this critical question with theoretical rigor, methodological sophistication, and empirical depth to produce an incisive and nuanced study that scholars and practitioners of counterterrorism cannot afford to ignore. Assaf Moghadam, author of Nexus of Global Jihad: Understanding Cooperation Among Terrorist Actors

One of the most rigorous studies to date. Jonathan Stevenson, New York Review of Books

Bryan C. Price is the founding executive director of the Buccino Leadership Institute at Seton Hall University. During a twenty-year career as an Army officer, he served in various command and staff positions, including combat tours in Iraq and Afghanistan. From 2012 to 2018, he directed the Combating Terrorism Center and served as an Academy Professor in the Department of Social Sciences at the U.S. Military Academy at West Point.