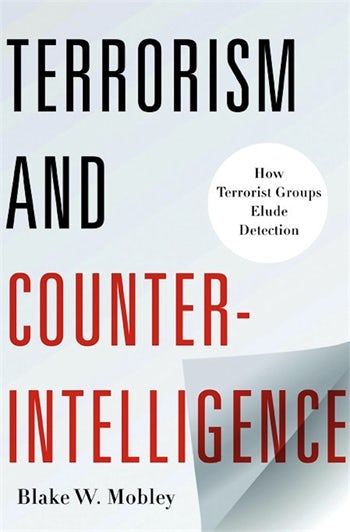 Protecting information, identifying undercover agents, and operating clandestinely—efforts known as counterintelligence—are the primary objectives of terrorist groups evading detection by intelligence and law enforcement officials. Some strategies work well, some fail, and those tasked with tracking these groups are deeply invested in the difference.

Discussing the challenges terrorist groups face as they multiply and plot international attacks, while at the same time providing a framework for decoding the strengths and weaknesses of their counterintelligence, Blake W. Mobley provides an indispensable text for the intelligence, military, homeland security, and law enforcement fields. He outlines concrete steps for improving the monitoring, disruption, and elimination of terrorist cells, primarily by exploiting their mistakes in counterintelligence.

A key component of Mobley's approach is to identify and keep close watch on areas that often exhibit weakness. While some counterintelligence pathologies occur more frequently among certain terrorist groups, destructive bureaucratic tendencies, such as mistrust and paranoia, pervade all organizations. Through detailed case studies, Mobley shows how to recognize and capitalize on these shortcomings within a group's organizational structure, popular support, and controlled territory, and he describes the tradeoffs terrorist leaders make to maintain cohesion and power. He ultimately shows that no group can achieve perfect secrecy while functioning effectively and that every adaptation or new advantage supposedly attained by these groups also produces new vulnerabilities.

Blake W. Mobley has written a groundbreaking study on how terrorist groups collect intelligence. He vividly portrays terrorist group dilemmas and weaknesses, as well as their ability to foil the security services of their adversaries. Daniel Byman, Georgetown University, and research director of the Saban Center at The Brookings Institution

With the strategic defeat of al Qaeda in sight, Terrorism and Counterintelligence offers a timely analysis of the vulnerabilities of terrorist organizations, which will speed their demise. Graham T. Allison, director of Harvard University's Belfer Center for Science and International Affairs

Counterintelligence remains a stepchild in the study of intelligence, despite the fact that every organization, including NGOs, does it in some form whether or not they use the language. Blake W. Mobley's book is a welcome addition to the literature on this subject, all the more so because it looks at the counterintelligence of terrorist groups. He combines solid scholarship with an insider's sense for how the world actually works. His framework—organizational structure, popular support, and controlled territory—applies well to terrorist groups. Slightly adjusted, it could also apply to other groups as well, including NGOs. Gregory F. Treverton, director, RAND Corporation's Center for Global Risk and Security and vice chair of the National Intelligence Council

Terrorism and Counterintelligence is an intellectual rollercoaster that shows the ups and downs of the biggest and most prominent terrorist groups the world has dissected so far and leaves the reader with a renewed sense of the power and control these groups have on traditional society. Ross W. Clark, Penn State University, Parameters

Scholars as well as counterterrorism practitioners will ﬁnd [this] an important book when considering the lifespan and vulnerabilities of contemporary terrorist groups. Terrorism and Political Violence