Edited by Sid Holt for the American Society of Magazine Editors. Introduction by Evan Ratliff, editor of The Atavist 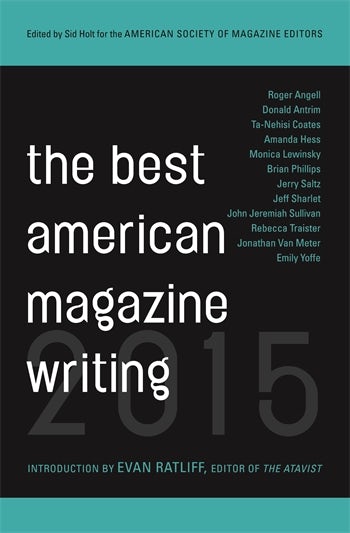 Edited by Sid Holt for the American Society of Magazine Editors. Introduction by Evan Ratliff, editor of The Atavist

This year's Best American Magazine Writing features articles on politics, culture, sports, sex, race, celebrity, and more. Selections include Ta-Nehisi Coates's intensely debated "The Case For Reparations" (The Atlantic) and Monica Lewinsky's reflections on the public-humiliation complex and how the rules of the game have (and have not) changed (Vanity Fair). Amanda Hess recounts her chilling encounter with Internet sexual harassment (Pacific Standard) and John Jeremiah Sullivan shares his investigation into one of American music's greatest mysteries (New York Times Magazine).

The anthology also presents Rebecca Traister's acerbic musings on gender politics (The New Republic) and Jerry Saltz's fearless art criticism (New York). James Verini reconstructs an eccentric love affair against the slow deterioration of Afghanistan in the twentieth century (The Atavist); Roger Angell offers affecting yet humorous reflections on life at ninety-three (The New Yorker); Tiffany Stanley recounts her poignant experience caring for a loved one with Alzheimer's (National Journal); and Jonathan Van Meter takes an entertaining look at fashion's obsession with being a social-media somebody (Vogue). Brian Phillips describes his surreal adventures in the world of Japanese ritual and culture (Grantland), and Emily Yoffe reveals the unforeseen casualties in the effort to address the college rape crisis (Slate). The collection concludes with a work of fiction by Donald Antrim, exploring the geography of loss. (The New Yorker).

Beginning with Ta-nehisi Coates' brilliant essay on reparations and ending with a poignant New Yorker piece, this collection lets you be in the know without having to scramble through endless material. Campus Circle

Introduction, by Evan Ratliff, editor of The Atavist
Acknowledgments, by Sid Holt, chief executive, American Society of Magazine Editors
The Case for Reparations, by Ta-Nehisi Coates
Women Aren't Welcome Here, by Amanda Hess
The College Rape Overcorrection, by Emily Yoffe
When Michael Dunn Compared Himself to a Rape Victim, He Was Following an Old, Racist Script and I Don't Care If You Like It and The Slenderman Stabbing Shows Girls Will Be Girls, Too, by Rebecca Traister
Shame and Survival, by Monica Lewinsky
Inside the Iron Closet: What It's Like to Be Gay in Putin's Russia, by Jeff Sharlet
Love and Ruin, by James Verini
The Ballad of Geeshie and Elvie, by John Jeremiah Sullivan
The Truth About Chicago's Crime Rates, by David Bernstein and Noah Isackson
The Sea of Crises, by Brian Phillips
Zombies on the Walls: Why Does So Much New Abstraction Look the Same? and Taking in Jeff Koons, Creator and Destroyer of Worlds and Post-Macho God: Matisse's Cut-Outs Are World-Historically Gorgeous, by Jerry Saltz
Follow Me: Kate Upton Leads the Charge of Models Who've Gone Crazy for Social Media, by Jonathan Van Meter
Jackie's Goodbye, by Tiffany Stanley
This Old Man, by Roger Angell
The Emerald Light in the Air, by Donald Antrim
Permissions
List of Contributors

The American Society of Magazine Editors is the principal organization for magazine journalists in the United States. ASME sponsors the National Magazine Awards in association with the Columbia University Graduate School of Journalism.

Sid Holt is chief executive of the American Society of Magazine Editors and a former editor at Rolling Stone and Adweek magazines.

Evan Ratliff is editor of the National Magazine Award-winning digital publication The Atavist. A contributing writer at Wired, he has also written for The New Yorker, Outside, and National Geographic.