Edited by Sid Holt for the American Society of Magazine Editors 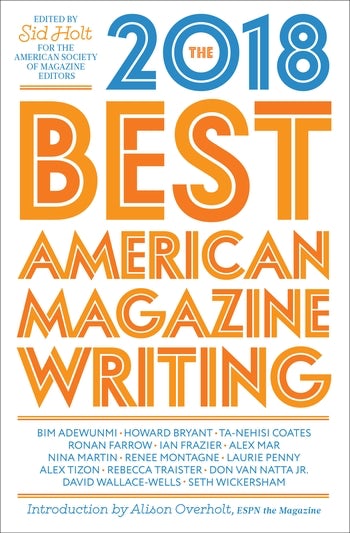 Edited by Sid Holt for the American Society of Magazine Editors

In a time of reckoning, this year’s National Magazine Awards finalists and winners focus on abuse of power in many forms. Ronan Farrow’s Pulitzer Prize–winning revelation of Harvey Weinstein’s depredations (New Yorker), along with Rebecca Traister’s charged commentary for New York and Laurie Penny’s incisive Longreads columns, speak to the urgency of the #MeToo moment. Ginger Thompson’s reporting on the botched U.S. operation that triggered a cartel massacre in Mexico (National Geographic/ProPublica) and Azmat Khan and Anand Gopal’s New York Times Magazine investigation of the civilian casualties of drone strikes in Iraq amplify the voices of those harmed by U.S. actions abroad. And Alex Tizon’s “My Family’s Slave” (Atlantic) is a powerful attempt to come to terms with the cruelty that was in plain sight in his own upbringing.

Responding to the overt racism of the Trump era, Ta-Nehisi Coates’s “My President Was Black” (Atlantic) looks back at the meaning of Obama. Howard Bryant (ESPN the Magazine) and Bim Adewunmi (Buzzfeed) offer incisive columns on the intersections of pop culture, sports, race, and politics. In addition, David Wallace-Wells reveals the coming disaster of our climate-change-ravaged future (New York); Don Van Natta Jr. and Seth Wickersham’s ESPN the Magazine reporting exposes the seamy sides of the NFL; Nina Martin and Renee Montagne investigate America’s shameful record on maternal mortality (NPR/ProPublica); Ian Frazier asks “What Ever Happened to the Russian Revolution?” (Smithsonian); and Alex Mar considers “Love in the Time of Robots” (Wired with Epic Magazine). The collection concludes with Kristen Roupenian’s viral hit short story “Cat Person” (New Yorker).
Introduction, by Alison Overholt, vice president and editor in chief, ESPN the Magazine, espnW, and the ESPYs
Acknowledgments
Abuses of Power and Weighing the Costs of Speaking Out About Harvey Weinstein and Harvey Weinstein’s Army of Spies, by Ronan Farrow, The New Yorker: Winner—Public Interest
Why the Harvey Weinstein Sexual-Harassment Allegations Didn’t Come Out Until Now and Your Reckoning. And Mine. and This Moment Isn’t (Just) About Sex. It’s Really About Work, by Rebecca Traister, New York: Winner—Columns and Commentary
The Horizon of Desire and We’re All Mad Here: Weinstein, Women, and the Language of Lunacy and The Unforgiving Minute, by Laurie Penny, Longreads: Finalist—Columns and Commentary
The Last Person You’d Expect to Die in Childbirth, by Nina Martin and Renee Montagne, ProPublica with NPR: Finalist—Public Interest
The Uncounted, by Azmat Khan and Anand Gopal, New York Times Magazine: Winner—Reporting
How the U.S. Triggered a Massacre in Mexico, by Ginger Thompson, National Geographic and ProPublica: Finalist—Reporting
What Ever Happened to the Russian Revolution?, by Ian Frazier, Smithsonian: Finalist—Essays and Criticism
The Uninhabitable Earth, by David Wallace-Wells, New York: Finalist—Essays and Criticism
My President Was Black, by Ta-Nehisi Coates, The Atlantic: Finalist—Feature Writing
Standing Down and Roger Goodell Has a Jerry Jones Problem, by Seth Wickersham and Don Van Natta Jr., ESPN the Magazine: Finalist—Reporting
How the Oscar Flub Demonstrates the Limits of Black Graciousness and How Oprah Got Her Acting Groove Back and Maria Sharapova’s Rivalry With Serena Williams Is in Her Head, by Bim Adewunmi, BuzzFeed News: Finalist—Columns and Commentary
The Williams Movement and Power Play and How Is This Still a Debate?, by Howard Bryant, ESPN the Magazine: Finalist—Columns and Commentary
Lola’s Story, by Alex Tizon, The Atlantic: Winner—Essays and Criticism
Love in the Time of Robots, by Alex Mar, Wired with Epic Magazine: Finalist—Feature Writing
Cat Person, by Kristen Roupenian, The New Yorker: Finalist—ASME Award for Fiction
Permissions
List of Contributors

Sid Holt is chief executive of the American Society of Magazine Editors and a former editor at Rolling Stone and Adweek magazines.

Alison Overholt is vice president and editor in chief of ESPN the Magazine, espnW, and the ESPYs.