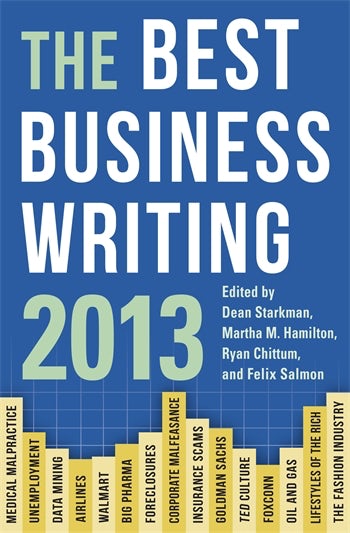 An anthology Malcolm Gladwell has called "riveting and indispensable," The Best Business Writing is a far-ranging survey of business's dynamic relationship with politics, culture, and life. This year's selections include John Markoff (New York Times) on innovations in robot technology and the decline of the factory worker; Evgeny Morozov (New Republic) on the questionable value of the popular TED conference series and the idea industry behind it; Paul Kiel (ProPublica) on the ripple effects of the ongoing foreclosure crisis; and the infamous op-ed by Greg Smith, published in the New York Times, announcing his break with Goldman Sachs over its trading practices and corrupt corporate ethos.

Read the introduction to The Best Business Writing 2013 (to view in full screen, click on icon in bottom right-hand corner)

Dean Starkman is editor of the Columbia Journalism Review's business section, The Audit, which tracks financial journalism in print and on the web, and is the magazine's Kingsford Capital Fellow. A reporter for two decades, he worked eight years as a Wall Street Journal staff writer and was chief of the Providence Journal's investigative unit. He has won numerous national and regional journalism awards and helped lead the Providence Journal to the 1994 Pulitzer Prize for Investigations.

Martha M. Hamilton is a writer and deputy editor with PolitiFact.com, which, in 2009, became the first non-print winner of the Pulitzer Prize. She also investigates complaints about financial journalism for CJR's The Audit. She was a writer, Wall Street and corporate crime editor, and personal finance columnist for The Washington Post until 2008. Hamilton is also the author, along with former Post colleague Warren Brown, of Black and White and Red All Over.

Ryan Chittum is deputy editor of CJR's The Audit. He's a former reporter for The Wall Street Journal and has written for numerous other publications, including the New York Times. He is also a contributor to Bad News: How America's Business Press Missed the Story of the Century. His recent work can be seen at www.cjr.org/author/ryan-chittum-1/.

Felix Salmon is the finance blogger for Reuters. He arrived in the United States in 1997 from England, where he worked at Euromoney magazine. He also wrote daily commentary on Latin American markets for the former news service, Bridge News, and created the Economonitor blog for Roubini Global Economics.