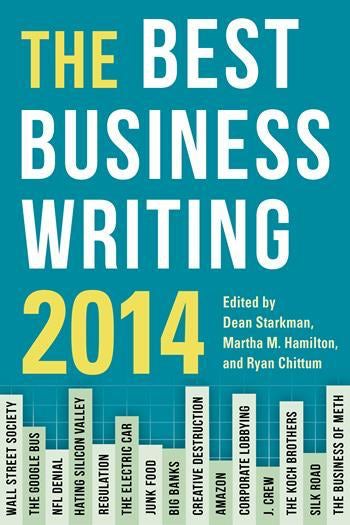 This anthology of the year's best investigative business writing explores the secret dealings of an elite Wall Street society and uncovers the crimes and misadventures of the young founder of Silk Road, the wildly successful online illegal goods site known as the "eBay of vice." It reveals how the Fed dithered while the financial crisis unfolded and explains why the leaders of a two-trillion-dollar bond fund went to war with each other. Articles from the best newspapers and magazines in the country delve into how junk-food companies use science to get you to eat more and how Amazon dodges the tax man how J.Crew revitalized itself by transforming its creative process and Russell Brand went deep on media and marketing after his GQ Awards speech went haywire.

Best Business Writing 2014 includes provocative essays on the NFL's cover-ups and corporate welfare, Silicon Valley's ultralibertarian culture, and the feminist critique of Sheryl Sandberg's career-advice book for women, Lean-In. Stories about toast, T-shirt making, and the slow death of the funeral business show the best writers can find worthy tales in even the most mundane subjects.
Introduction
Acknowledgments
Part I. Silicon Culture
1. Why We Are Allowed to Hate Silicon Valley, by Evgeny Morozov
2. Diary: Google Invades, by Rebecca Solnit
3. Facebook Feminism, Like It or Not, by Susan Faludi
4. Dead End on Silk Road: Internet Crime Kingpin Ross Ulbricht's Big Fail, by David Kushner
Part II. Brave New Economic World
5. A Tale of Two Londons, by Nicholas Shaxson
6. London's Laundry Business, by Ben Judah
7. How Technology and Hefty Subsidies Make U.S. Cotton King, by Robert Smith
8. Invisible Child: Girl in the Shadows: Dasani's Homeless Life, by Andrea Eliot
9. Russell Brand and the GQ Awards: "It's Amazing How Absurd It Seems", by Russell Brand
10. Maximizing Shareholder Value: The Goal That Changed Corporate America, by Jia Lynn Yang
Part III. Frenzied Finance
11. One Percent Jokes and Plutocrats in Drag: What I Saw When I Crashed a Wall Street Secret Society, by Kevin Roose
12. Here's Why Wall Street Has a Hard Time Being Ethical, by Chris Arnade
13. How the Fed Let the World Blow Up in 2008, by Matthew O'Brien
14. Gross vs. El-Erian: Inside the Showdown Atop the World's Biggest Bond Firm, by Gregory Zuckerman amd Kirsten Grind
15. Secret Currency Traders' Club Devised Biggest Market's Rates, by Liam Vaughan, Gavin Finch, and Bob Ivry
16. Lunch with the FT: Meredith Whitney, by Lucy Kellaway
17. A Pivotal Financial Crisis Case, Ending with a Whimper, by Jesse Eisinger
Part IV. Unhealthy Business
18. Use Only as Directed, by Jeff Gerth and T. Christian Miller
19. Merchants of Meth: How Big Pharma Keeps the Cooks in Business, by Jonah Engle
20. The Extraordinary Science of Addictive Junk Food, by Michael Moss
21. League of Denial: The NFL's Concussion Crisis, by Michael Kirk, Mike Wiser, Steve Fainaru, and Mark Fainaru-Wada
Part V. Creative Destruction
22. How Jenna Lyons Transformed J.Crew Into a Cult Brand, by Danielle Sacks
23. The Mysterious Story of the Battery Startup That Promised GM a 200-Mile Electric Car, by Steve LeVine
24. The Death of the Funeral Business, by Sandy Hingston
25. Declara Co-Founder Ramona Pierson's Comeback Odyssey, by Ashlee Vance
26. A Toast Story, by John Gravois
Part VI. The Politics of Business
27. Washington's Robust Market for Attacks, Half-Truths, by Michael Kranish
28. He Who Makes the Rules, by Haley Sweetland Edwards
29. A Word from Our Sponsor, by Jane Mayer
30. Amazon's (Not So) Secret War on Taxes, by Peter Elkind with Doris Burke
31. How the NFL Fleeces Taxpayers, by Gregg Easterbrook
List of Contributors
Permissions

Dean Starkman is based in New York and covers Wall Street as a staff writer for the Los Angeles Times. A reporter for two decades, he worked for eight years as a Wall Street Journal staff writer and was chief of the Providence Journal's investigative unit. He has won numerous national and regional journalism awards and helped lead the Providence Journal to the 1994 Pulitzer Prize for Investigations. He is the author of The Watchdog That Didn't Bark: The Financial Crisis and the Disappearance of Investigative Journalism.

Martha M. Hamilton is a contributor to the Washington Post's "Get There," a new section on money and its power to change lives. She is also the author, along with former Post colleague Warren Brown, of Black and White and Red All Over.

Ryan Chittum is a senior writer at the Columbia Journalism Review and a former reporter for the Wall Street Journal. He has written for numerous other publications, including the New York Times. He is also a contributor to Bad News: How America's Business Press Missed the Story of the Century. His recent work can be seen at www.cjr.org/author/ryan-chittum-1/.