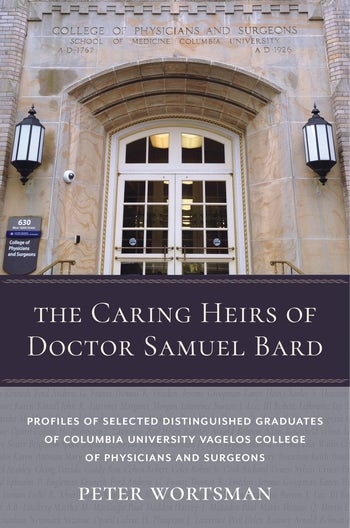 The alumni of Columbia University Vagelos College of Physicians and Surgeons (VP&S) have made remarkable strides in medicine, academia, public health, and industry. In this they follow in the footsteps of Samuel Bard (1742–1821), a prominent early American physician and a founder of what would become VP&S. In The Caring Heirs of Doctor Samuel Bard, Peter Wortsman offers a selection of profiles of Columbia-educated doctors who have made a fundamental difference in the lives of others.

The physicians profiled in this book represent the complete spectrum of MDs. They have charted new fields of medicine, resolved long-standing biochemical mysteries, discovered the causes and cures of diseases, developed vaccines, pioneered surgical procedures, helped halt epidemics, and cared for imperiled populations. Some have run hospitals, medical schools, universities, the National Institutes of Health, the National Library of Medicine, the Centers for Disease Control and Prevention, city health departments, and major pharmaceutical concerns. Others practiced at the White House, climbed mountains, or flew to outer space. Still others wrote pioneering papers, edited prestigious medical journals, and authored prize-winning books and best-selling novels. In each case, the clinical training, scientific thoroughness, and humanistic values inculcated at Columbia had a formative influence on their thinking and practice. In telling their stories, The Caring Heirs of Doctor Samuel Bard illustrates the importance of clinical rigor and humanistic caring in the practice of medicine and offers readers a rare insight into the heart and soul of American medicine at its best.

In these profiles of some of America’s most notable, influential, and fascinating MDs, Peter Wortsman merges social history, theory of the professions, and an intimate local cultural anthropology of Columbia University’s medical center. Our Columbian history provides a microcosm of the history of medicine writ large, showing the obligatory interweaving of clinical practice and basic science breakthroughs. The Caring Heirs of Doctor Samuel Bard will be an inestimable resource for all interested in medicine and its interface with society, as well as a source of inspiration to medical students and applicants to medical school. Rita Charon, MD, PhD, Professor and Chair of Medical Humanities and Ethics and Executive Director of Columbia Narrative Medicine

Acknowledgments
Taking Doctors’ Histories, a Preface
1. A New Dean Digs in at Boston University School of Medicine, by Karen Antman ʼ74
2. A Champion of Health Equality at the Helm of the NYC Department of Health, by Mary T. Bassett ʼ79
3. New Jersey’s Health Care Crusader, by Stanley S. Bergen, Jr. ʼ55
4. A Nobel Laureate’s Lifelong Commitment to Curiosity, by Baruch Blumberg ʼ51
5. Babies’ Best Friend, by T. Berry Brazelton ʼ43D
6. Musings of a University President Emeritus, by Keith Brodie ʼ65
7. Promoting Respect for “Our Future Selves,” by Robert N. Butler ʼ53
8. A Neurosurgeon at the Helm of the AMA, by Peter Carmel MSD ʼ70
9. A Vitreoretinal Visionary, by Stanley Chang ʼ74
10. Protecting Imperiled Populations, by Davida Coady ʼ65
11. How Three P&S Alumni Bucked the Odds and Made It Big in Biotech, by Ron Cohen ʼ81, Paul Maddon MD ʼ88 MD PhD, and George Yancopoulos MD ʼ86, PhD ʼ87
12. An American Odyssey, by Robert Coles ʼ54
13. Medicine by the Book, by Robin B. Cook ʼ66
14. A Shared Life in Medicine, Canadian Style, by Richard ʼ55 and Sylvia Cruess ʼ55
15. Surgeon-Scientist Takes Knowledge to the Cutting Edge, by Patricia Donahoe ʼ64
16. Tuning-up the Engine of Public Health in the Motor City, by Abdul El-Sayed ʼ14
17. The Un-Retiring Dean of American Rheumatologists, by Ephraim P. Engleman ʼ37
18. From Student to Surgeon to University Trustee—a Columbia Journey, by Kenneth Forde ʼ59
19. From Endocrinology to Admissions, a Life in Medicine, by Andrew G. Frantz ʼ55
20. Practicing the “Art of the Possible,” by The Outgoing Director of the CDC Reflects on His Time at the Helm, by Thomas R. Frieden MD/MPH ʼ86
21. Medicine by Bench, Bedside, and Book, by Jerome Groopman ʼ76
22. A Pioneer in Adolescent Medicine Committed to Health and Well-being for All, by Karen Hein ʼ70
23. At Home in High Places, by Charles S. Houston ʼ39
24. An All-Star on the Team Against TB, by Michael Iseman ʼ65
25. Championing Intellectual Rigor and Risk at the American University of Beirut, by Fadlo R. Khuri ʼ89
26. Making Health Care Happen, a Committed Primary Care Practitioner in the Deep South, by Karen Kinsell ʼ93
27. Urologist, Historian, Collector, Sleuth, by John K. Lattimer ʼ38
28. Yes, There Is Balm in Gilead, by Margaret Morgan Lawrence ʼ40
29. A Doctor in the House—the White House, That Is, by Burton J. Lee, III ʼ56
30. Receptive to Receptors, by Robert J. Lefkowitz ʼ66
31. Adventures in Virology, by Jay Levy ʼ65
32. A Digital Pioneer at the National Library of Medicine, by Donald A.B. Lindberg ʼ58
33. Out of Anguish into Africa, by Martha M. MacGuffie ʼ49
34. Battling Invisibility—a Primary Care Clinician and Spokesperson for the Care of Lesbians, Gays, Bisexuals, and Transgender People, by Harvey J. Makadon ʼ77
35. At the Cancer Command, by Paul Marks ʼ49
36. A Pivotal Player at P&S and Presbyterian Hospital Throws in the White Coat
37. A Surgeon in Space, by F. Story Musgrave ʼ64
38. A Military Neurologist on the Front Against Chemical Attack, by Col. Jonathan Newmark, MC, USAR ʼ78
39. It Takes Heart, by Suzanne Oparil ʼ65
40. An Educator Not Afraid to Stick His Neck Out, by Calvin H. Plimpton MSD ʼ51
41. Notes of a Pioneering Neurosurgeon, by J. Lawrence Pool MD ʼ32, MSD ʼ40
42. First Woman of Medicine, by Helen Ranney ʼ47
43. Medicine by Blue Pencil, by Arnold Relman ʼ46
44. A Doctor to the World, by Allan Rosenfield ʼ59
45. Kidneys are Color-blind, by Velma Scantlebury ʼ81
46. The Hands-On Surgeon-in-Chief of the Hospital for Special Surgery, by Thomas P. Sculco ʼ69
47. The Assistant Secretary for Health is a Doctor First and Foremost, by Eve Slater ʼ71
48. Rebel Doctor with a Cause, by Benjamin Spock ʼ29
49. A Veteran NIH Investigator Takes on Complementary and Alternative Medicine, by Stephen E. Straus ʼ72
50. A Pioneering African American Perinatologist Looks Back with Pride, by Yvonne Thornton MD ʼ73, MPH ʼ96
51. Merck’s MD at the Top, by P. Roy Vagelos ʼ54
52. Nobel Laureate at the NIH, by Harold Varmus ʼ66
53. for Women’s Health, by Lila Wallis ʼ51
54. A Matter of Heart, by Clyde Y. C. Wu ʼ56
55. The Scientific Wunderkind of Biotech Makes Proteins Do the Right Thing, by George D. Yancopoulos PhD ʼ86, MD’87
Author’s Bio
Photo Credits

Peter Wortsman was managing editor of alumni publications at the Vagelos College of Physicians and Surgeons at Columbia University from 1987 to 2018. He is the author of four previous books, two plays, and numerous translations from German.