Why China Will Not Rule the World 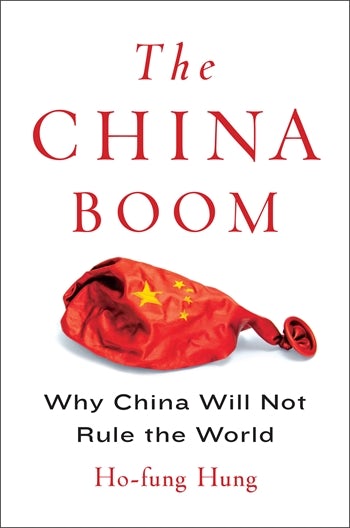 Why China Will Not Rule the World

Many thought China's rise would fundamentally remake the global order. Yet, much like other developing nations, the Chinese state now finds itself in a status quo characterized by free trade and American domination. Through a cutting-edge historical, sociological, and political analysis, Ho-fung Hung details the competing interests and economic realities that temper the dream of Chinese supremacy—forces that are stymieing growth throughout the global South.

Hung focuses on four common misconceptions: that China could undermine orthodoxy by offering an alternative model of growth; that China is radically altering power relations between the East and the West; that China is capable of diminishing the global power of the United States; and that the Chinese economy would restore the world's wealth after the 2008 financial crisis. His work reveals how much China depends on the existing order and how the interests of the Chinese elites maintain these ties. Through its perpetuation of the dollar standard and its addiction to U.S. Treasury bonds, China remains bound to the terms of its own prosperity, and its economic practices of exploiting debt bubbles are destined to fail. Hung ultimately warns of a postmiracle China that will grow increasingly assertive in attitude while remaining constrained in capability.

[An] informative study.... [The China Boom] paints a convincing picture that China may not be the superpower many predicted it to be. Publishers Weekly

This valuable treatise will appeal to both scholars and more casual readers with an interest in China. Library Journal

It is a fast-paced, highly readable, thoroughly provocative, and (rare for an academic book) truly enjoyable account of 400 years of Chinese economic history right up to the present day. Asian Review of Books

So many books on China recycle the same stories and historical anecdotes, but this one tells the story from the point of view of economic history. It is scholarly yet readable, interesting throughout. Marginal Revolution

The book should be mandatory reading for anyone concerned with transnational economic policy planning. Pacific Affairs

an important and balanced scholarly book. International Relations of the Asia Pacific

Ho-fung Hung offers us the clearest analysis we have of the historical origins of China's economic model and for its future prospects. Hung's work is political economy at its best. Contemporary Sociology

Ho-fung Hung is Henry M. and Elizabeth P. Wiesenfeld Associate Professor in Political Economy at Johns Hopkins University. He is the author of the award-winning book Protest with Chinese Characteristics: Demonstrations, Riots, and Petitions in the Mid-Qing Dynasty (Columbia, 2011).