The Clash of Values 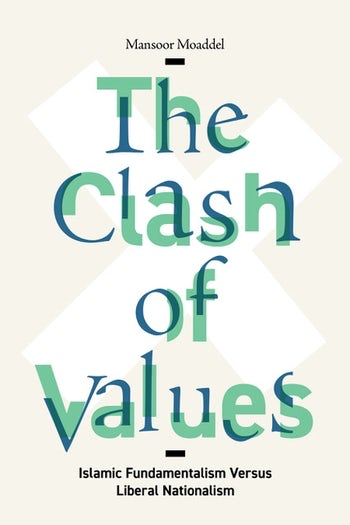 The Clash of Values

Much of the Middle East and North Africa still appears to be in a transitional period set in motion by the 2011 Arab uprisings, and the political trajectory of the region remains difficult to grasp. In The Clash of Values, Mansoor Moaddel provides groundbreaking empirical data to demonstrate how the collision between Islamic fundamentalism and liberal nationalism explains the region’s present and will determine its future.

Analyzing data from over 60,000 face-to-face interviews of nationally representative samples of people in seven countries—Egypt, Iraq, Lebanon, Pakistan, Saudi Arabia, Tunisia, and Turkey—Moaddel reveals the depth and breadth of the conflict of values. He develops measures of expressive individualism, gender equality, secularism, and religious fundamentalism and shows that the factors that strengthen liberal values also weaken fundamentalism. Moaddel highlights longitudinal data showing changes in orientations toward secular politics, Western-type government, religious tolerance, national identity, and to a limited extent gender equality, as well as a significant decline in support for political Islam, over the past decade. Focusing on these trends, he contends that the Arab Spring represents a new phase of collective action rooted in the spread of the belief in individual liberty. Offering a rigorous and deeply researched perspective on social change, The Clash of Values disentangles the Middle East and North Africa’s political complexity and pinpoints a crucial trend toward liberal nationalism.

Moaddel comes to the subject of values with deep knowledge of the politics and histories of Islamic nations, along with unparalleled skill and experience in doing surveys in those countries. He delivers the definitive analysis of how religious fundamentalism conflicts with liberal nationalism to varying degrees throughout the region. Michael Hout, New York University

Is a new, more liberal cultural episode on the horizon for the Middle East? The Clash of Values offers new conceptualizations of religious fundamentalism and liberal values, along with clearly presented survey findings, to suggest that such a trajectory is entirely possible. Valentine M. Moghadam, author of Globalization and Social Movements: Islamism, Feminism, and the Global Justice Movement

This is a timely book that traces political and cultural transformations across many countries in the Muslim world with sound empirical evidence and a nuanced theoretical framework. Moaddel explains the recent turmoil as an expression of ideational shift from Islamic fundamentalism to liberal nationalism, highlighting serious cultural change that accounts for the Arab Spring and other changes in the region. Madawi Al-Rasheed, London School of Economics

Mansoor Moaddel is a professor of sociology at the University of Maryland, College Park. His many books include Islamic Modernism, Nationalism, and Fundamentalism: Episode and Discourse (2005) and Values, Political Action, and Change in the Middle East and the Arab Spring (2017).