The Columbia Anthology of Chinese Folk and Popular Literature 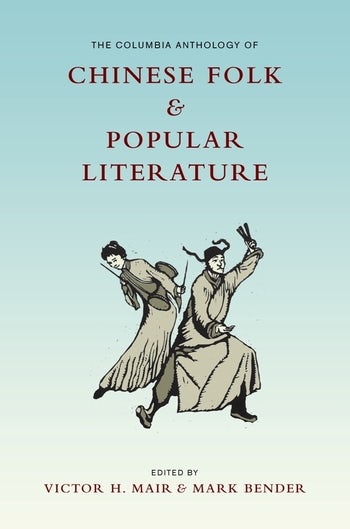 The Columbia Anthology of Chinese Folk and Popular Literature

In The Columbia Anthology of Chinese Folk and Popular Literature, two of the world's leading sinologists, Victor H. Mair and Mark Bender, capture the breadth of China's oral-based literary heritage. This collection presents works drawn from the large body of oral literature of many of China's recognized ethnic groupsincluding the Han, Yi, Miao, Tu, Daur, Tibetan, Uyghur, and Kazakand the selections include a variety of genres. Chapters cover folk stories, songs, rituals, and drama, as well as epic traditions and professional storytelling, and feature both familiar and little-known texts, from the story of the woman warrior Hua Mulan to the love stories of urban storytellers in the Yangtze delta, the shaman rituals of the Manchu, and a trickster tale of the Daur people from the forests of the northeast. The Cannibal Grandmother of the Yi and other strange creatures and characters unsettle accepted notions of Chinese fable and literary form. Readers are introduced to antiphonal songs of the Zhuang and the Dong, who live among the fantastic limestone hills of the Guangxi Zhuang Autonomous Region; work and matchmaking songs of the mountain-dwelling She of Fujian province; and saltwater songs of the Cantonese-speaking boat people of Hong Kong. The editors feature the Mongolian epic poems of Geser Khan and Jangar; the sad tale of the Qeo family girl, from the Tu people of Gansu and Qinghai provinces; and local plays known as "rice sprouts" from Hebei province. These fascinating juxtapositions invite comparisons among cultures, styles, and genres, and expert translations preserve the individual character of each thrillingly imaginative work.

A work of monumental proportions, filling a huge gap in a field that most Chinese literature scholars in the West and China have chosen to ignore. Susan R. Blader, Dartmouth College, translator of Tales of Magistrate Bao and His Valiant Lieutenants, Selections from Sanxia Wuyi

The first book to offer a substantial, representative sample of China's rich and complex oral traditions. Given the unprecedented nature of its scope and scale, it will be novel and innovative even to old 'China hands' with its abundance of little known gems from ethnic minorities. Even the old favorites, stories derived from the most famous myths, legends, and fiction, are retold in regional oral genres rarely accessible in translation, appearing here new and fresh. Anne E. McLaren, author of Performing Grief: Bridal Laments in Rural China

Impressive. This valuable resource gives insight into Chinese culture in all its ethnic diversity. With themes ranging across all aspects of human experience, it is a treasure trove of many genres that will explode preconceptions and captivate students and scholars alike. Margaret Wan, University of Utah

an impressive and worthwhile enterprise, offering a wonderful selection of folk literature that would otherwise not be accessible to the English-speaking reader. Loh Su Hsing, Asian Review of Books

...the publication of this anthology should be considered no less than epoch-making. Liangyan Ge, University of Notre Dame, CHINOPERL Papers

This valuable resource is the first anthology of China's rich oral tradition, and it also provides insight into the minority ethnic groups within the borders of modern China. Choice

...a sophisticated and engaging introduction to Chinese folk culture... Journal of Folklore Research

It is no exaggeration to say that The Columbia Anthology of Chinese Folk and Popular Literature will become the source book for all researchers working in the area of folk literature in China, and a valuable resource for all researchers in the subject area. James Grayson, University of Sheffield, Folklore

Victor H. Mair is professor of Chinese language and literature at the University of Pennsylvania and editor of The Columbia Anthology of Traditional Chinese Literature and The Columbia History of Chinese Literature.Mark Bender is associate professor of East Asian languages and literatures at The Ohio State University and author of Plum and Bamboo: China's Suzhou Chantefable Tradition and Butterfly Mother: Miao (Hmong) Creation Epics from Guizhou, China.